Take a deep breath, close your eyes and imagine that this is all yours: a magnificent manor, a breath-taking view, agricultural facilities for preparing wine and bread and an olive press for producing boutique olive oil – what more do you need?

The manor trail passes through Mediterranean woodland and an expansive meadow and reaches Horvat Aqav – the remains of a Byzantine manor on the highest point of Ramat Hanadiv. The trail descends into the wadi, the Timsah stream channel, and returns in a circular trail. 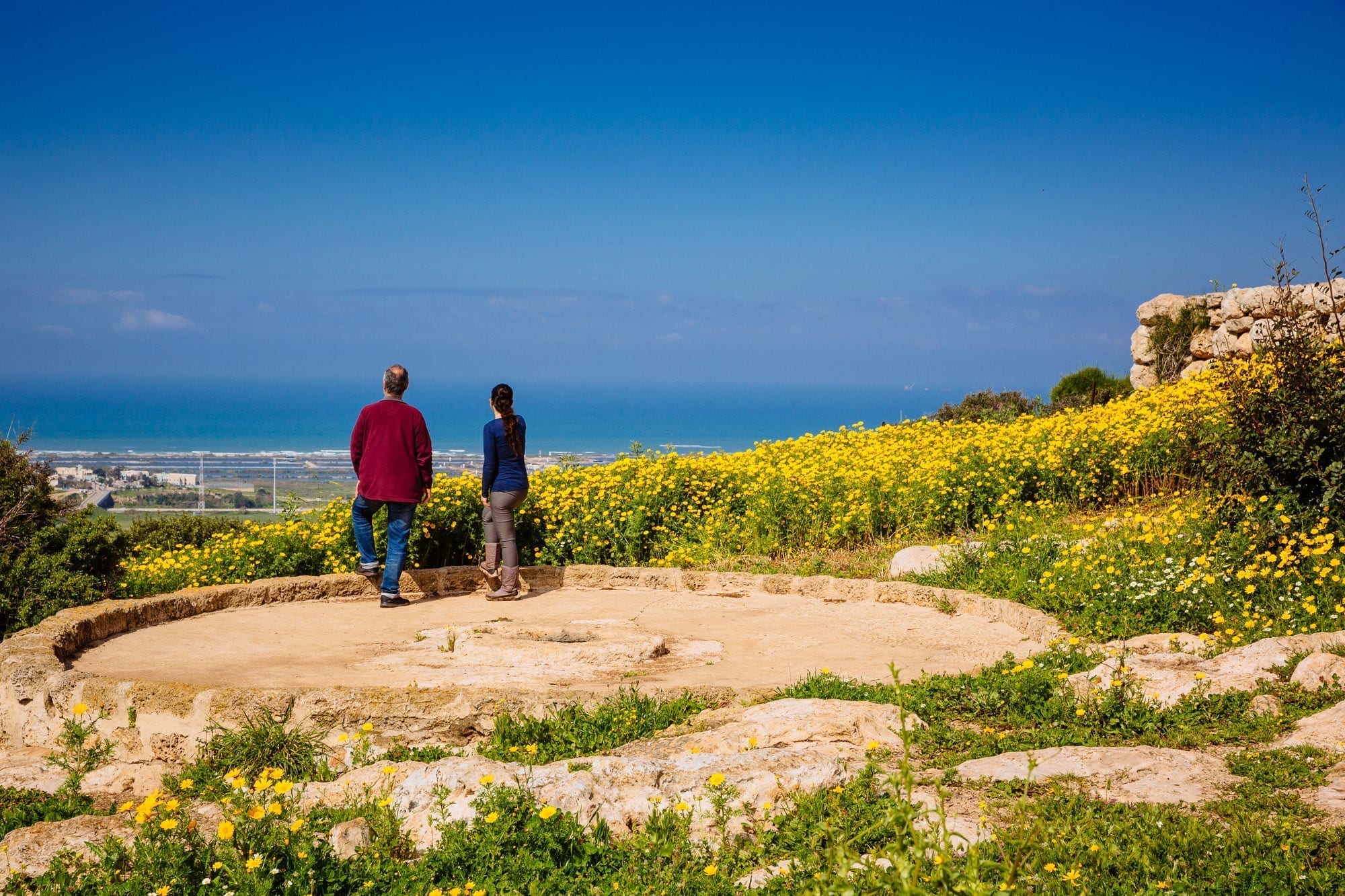 Type of trail: Intermediate, suitable for children from the age of 5-6, babies in a carrier.
Colour of marking: White-red-white
Length of trail: About 4 km
Duration of hike: Two to three hours
Starting point: The circular trail; begins and ends at the trailhead.
Recommended season: Autumn, winter and spring

Emergency telephone for on-duty supervisor (after closing time): 053-6452336
Please note: The descent from Horvat ‘Aqav to Wadi Timsach may be slippery after rain.
Download the Manor trail map The manor trail begins at the Head of Trails plaza, and is marked red-white-red along its entire length. The Israel National Trail marking (orange-blue-white) may also be seen at the beginning of the trail.

The trail is initially narrow and winding, passing by Mediterranean woodland with shrubs and abundant, diverse flowers that vary with the seasons. Since the plant richness here is high you are recommended to being a flower guide with you to help you identify them. If you don’t have one, you can buy one at the InfoShop near the entrance to the gardens.

At the beginning of the trail we’ll see the chimneys of Israel Electric Corporation in front of us, and to the left, the Hills of Samaria and the fertile HaNadiv Valley. To the right the sea will begin to peep through, followed by the Carmel ridge. Further on, we’ll see two sandstone quarries (point 1 on the map), part of which become water reservoirs during wet winters, enjoyed by frogs and other amphibians.

Graceful cypress trees and rare plants
The shrubby vegetation is replaced by an expansive open area with low vegetation, surrounded by the view to HaNadiv Valley, the mountains and the sea. Soon we’ll reach the cypress grove (point 2 on the map). Two species of elegant cypresses are planted here: wild cypress (Cupressus sempervirens f. horizontalis) with spreading branches, and Mediterranean cypress (Cupressus sempervirens), whose branches are close to its trunk – this is a cultivated tree used for ornamental purposes and as a windbreak to protect cultivated fields. The cypresses here are joined by Christ’s thorn jujube (Ziziphus spina-christi) trees – spiny trees that produce small, round fruit.

For years this area was used as farmland that was cultivated using traditional ploughs that plough to a shallow depth, enabling rare species, such as ornamental onion (Allium schubertii), Salvia eigii, cutleaf sage (S. pinnata) and Lachnophyllum noaeanum, to thrive. Modern agricultural cultivation methods include more frequent, deeper ploughing, and together with the increasing use of fertilisers and pesticides, these species are in increasing danger of extinction. 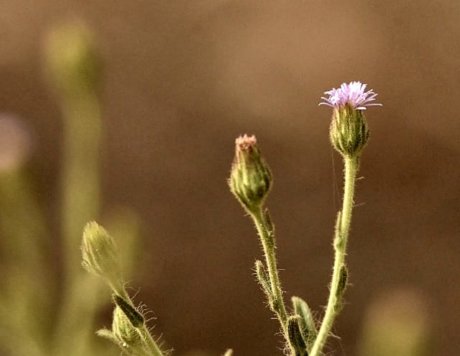 We’ll encounter a yellow trail (a trail that connects different trails at Ramat Hanadiv) but we’ll continue with the red one. Since there is almost no shade along this trail, we’ll take the opportunity of resting a while at the quaint shady spot that we’ll encounter soon.

From here the markings lead to a narrow trail though an area with shrubby vegetation, and suddenly without warning we’ll discover the beginning of the Horvat Aqav compound, or in Arabic, Hirbet Mantzur al-Aqav.

Horvat Aqav: who wouldn’t want a manor here?
First we’ll see a stone wall with steps nearby. We’ll go up the stairs and walk along the central path. We’ve reached Horvat Aqav (point 3 on the map).

We’re now at the highest point of Ramat Hanadiv (141 metres above sea level) on the south-western cliff of Mt. Carmel, which overlooks a spectacular view of Samaria and HaNadiv Valley, but mainly the sea and the coastal plain. This is a location in which many would undoubtedly wish to live during any period of history… this location is the compound in which everything was discovered.

The archaeological excavations that began in 1984 revealed a large compound that was used as living quarters during three different periods: during the Second Temple Period (1st century CE) there was a large manor that belonged to a Jewish family. 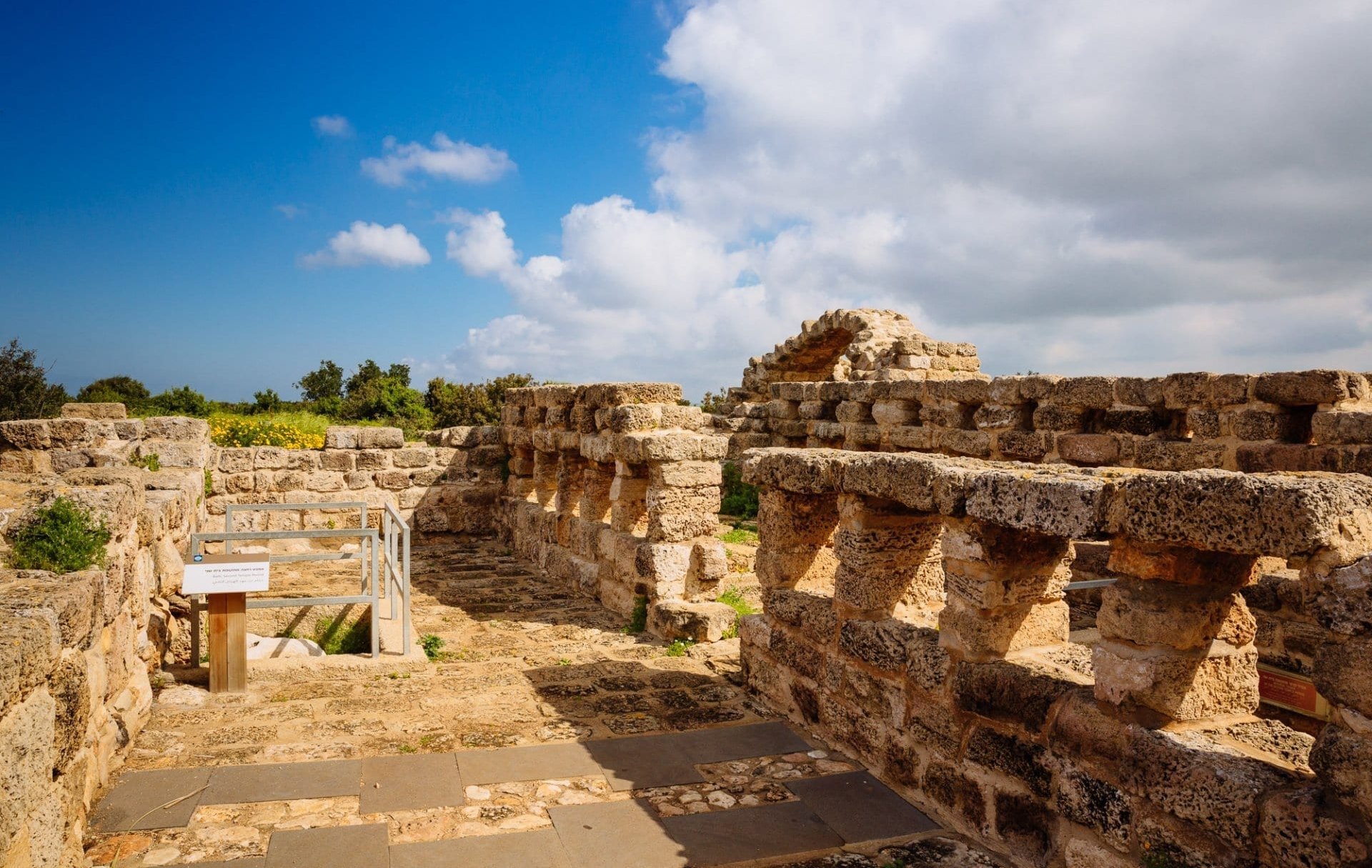 During the Byzantine Period (4th-5th centuries CE) there was an agricultural villa with storehouses and stables, accompanied by a wine press and two cisterns. During the Middle Ages (13th-14th centuries CE) temporary settlers who found protection among the ruins lived here. Most of the stones from the ruins were removed in the late 19th century, probably to build Huri house on the Spring Trail. Signage at the site describes what was here during each period.

We’ll enter the building and wander among the different rooms. Outside the building are agricultural facilities that were used by the residents of the Byzantine manor: the large, protruding circle facing the view is a wine press, probably indicating a grape-growing tradition that lasted from the Second Temple Period to the Byzantine Period. On the left, at a more distant point, there are two cisterns.

After completion of the excavations and restoration of the site in the 1990s, in memory of Amshel Rothschild, olive trees, fig trees and grape vines, which were important crops in ancient times, were planted here. Herbs such as Syrian oregano, Cretan germander and fringed rue were also planted.

More on Horvat Aqav can be read here in detail 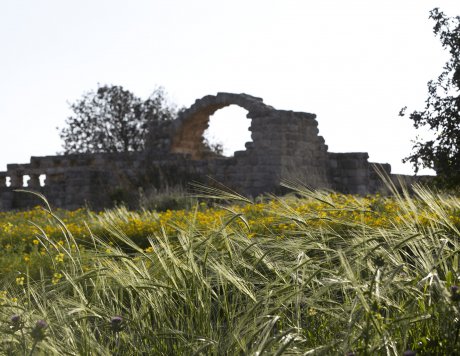 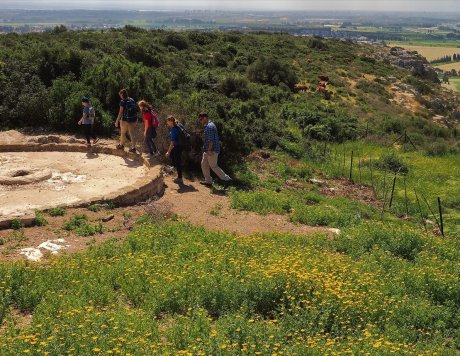 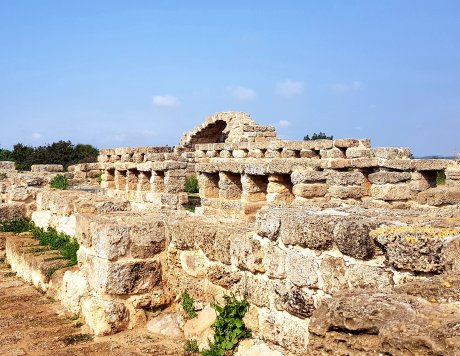 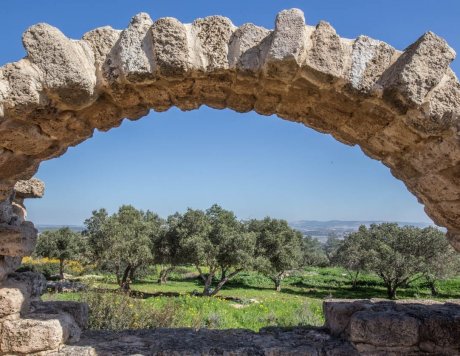 Carmel Coastal Plain is spread out before us

It’s hard to ignore the breath-taking view from this location. The map installed at the site has a key with the names of the settlements that can be seen from here.

For hundreds of year the Carmel Coastal Plain was a swampy, malaria-infested area. Baron Rothschild, who saw in his vision a settled region of cultivated land, began to fulfil his dream in 1921, by draining the Shuni and Kebara swamps. He also helped the local Arabs settle on the sandstone ridge at Jisr al-Zarqa village, where their descendants live until today. The swamps were replaced by cultivated fields, banana fields and fish ponds. Descending into the wadi
We’ll follow our footsteps to the beginning of the compound and turn left; here the trail continues with the red-white-red marking and the more challenging part of the trail begins, including a rocky descent to the Timsah Stream channel. If you have children below the age of 5-6 or you’ve had enough by now, you can go back the way you came (the trail is 1.5 km up to here) or you can follow the shortened circular trail: turn right on the unmarked trail that can be seen when entering the Horvat Aqav compound (see the map). At the fork turn left and keep going straight – the trail crosses the red marking and then the green marking, and finally reaches the parking area.

To continue the circular route, the marking turns left, leading us to another shady rest spot, in case you wandered around the manor and lookout and didn’t have time to rest… from here we turn left to a narrow, winding trail surrounded by shrubs and flowers, just like at the beginning of the route. In late winter we’ll see the tulips in flower here. 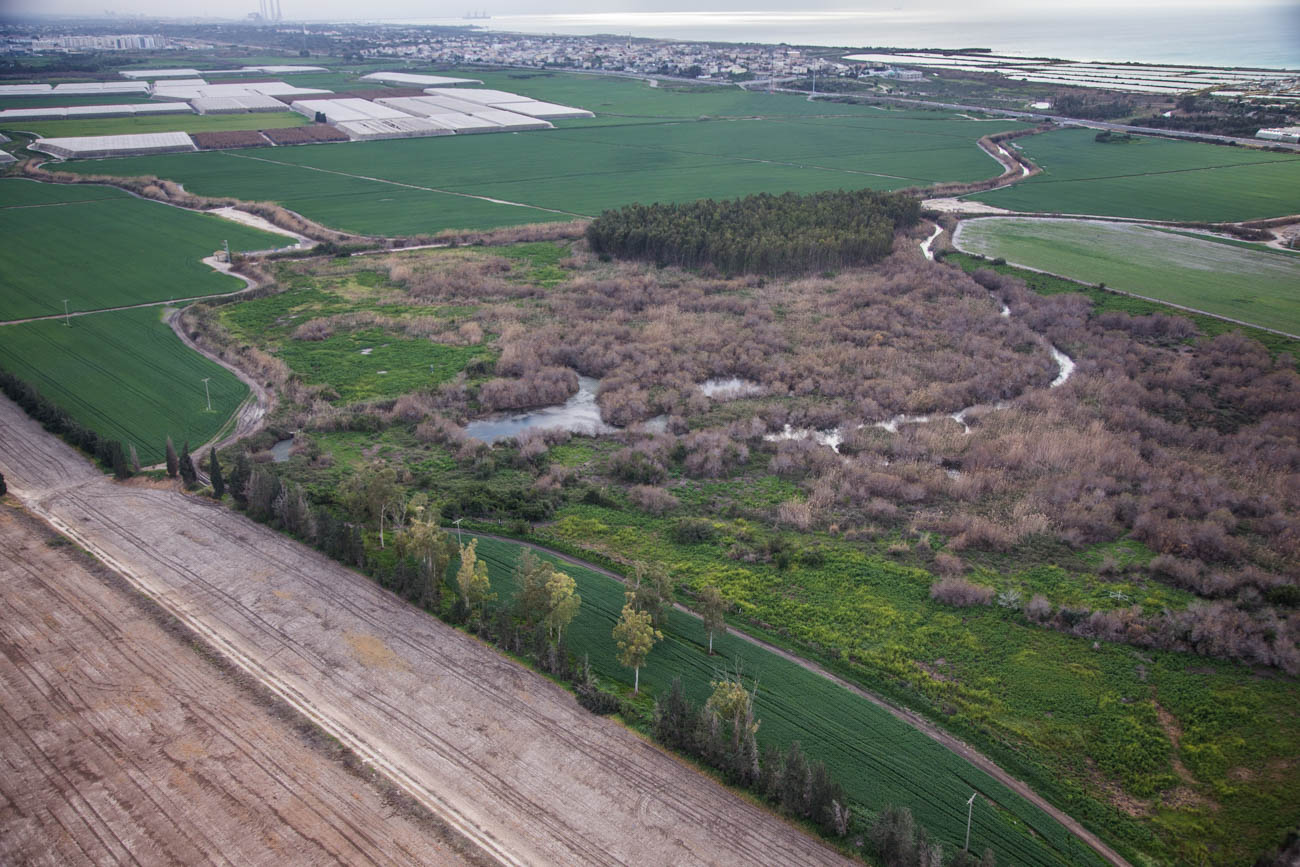 To our right we have a view of the houses of Zichron Ya’akov, and slowly we’ll begin going down, blending into the ever-approaching landscape. We’ve reached another lookout (point 4 on the map), this time north-west to Haifa. Among the banana fields flow the Timsah springs that create ponds surrounded by vegetation, from which the water flows in a small stream to Taninim River, a perennial stream that is the last of the large rivers with unpolluted water. It flows to the sea, and south of Ma’agan Michael meets Ada River coming from the south.

The descent becomes steeper and now we descend right into the wadi, to Timsah Stream channel, which is an intermittent stream that flows after the rain.

We’ve come right into the wadi, between the two Carmel ridges, and once again the background has changed. We’ll stop a while and enjoy a quiet pause in the heart of the wadi, just like the wildlife that hides here.

From here the markings go back up to the second ridge. The trail passes through pine groves, and splits into a “fork”, but the two trails soon meet up again, so it doesn’t matter which one you follow. Make sure you don’t turn down the third trail that leads out to the left. The red marking will bring us all the way back to where we started at the Head of Trails plaza. 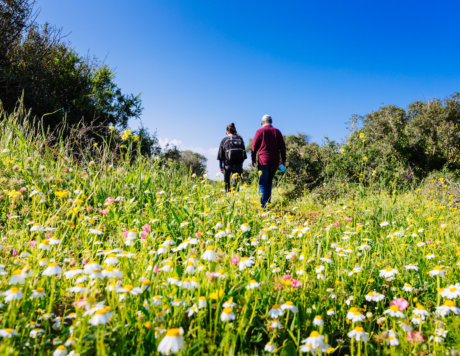 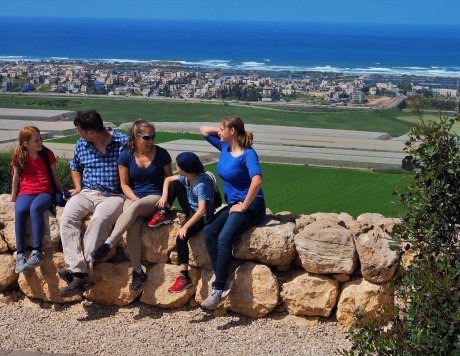 Thank you for choosing to hike in the Nature Park at Ramat Hanadiv. We’ve put together a number of tips and guidelines for you so that your hiking experience will be safe and enjoyable: Hiking Correctly