General Information for GuidesWhat is the Nature Park at Ramat Hanadiv?

What is the Nature Park at Ramat Hanadiv?

Until 1985, the Nature Park at Ramat Hanadiv, the area surrounding the Memorial Gardens and the burial crypt of Baron Rothschild, was a blank spot on the map. No hikers, researchers or other stakeholders visited the site, so it waited for its hidden potential to be discovered. Even the interesting archaeological sites – Horvat Aqav and Horvat Aleq – as well as the Ein Zur spring, waited to be discovered, buried for hundreds and thousands of years under a thick layer of soil. This introduction will briefly describe what happened to this site that turned it into such an attractive place for diverse communities. 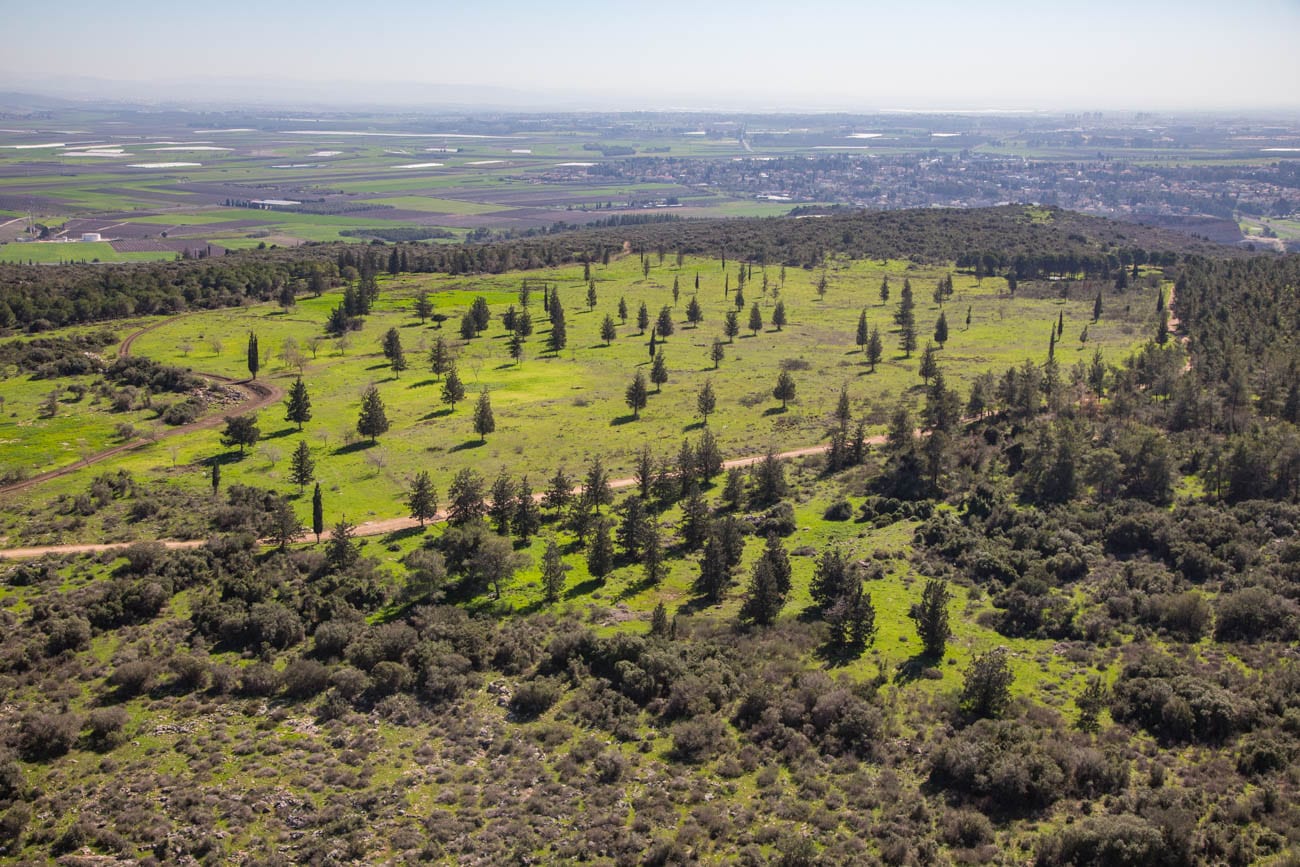 Ramat Hanadiv is a modest-sized land unit – about 5,000 dunams (500 ha) – at the southern end of the Mt. Carmel Range. The land is locked between Zikhron Ya’akov to the north and Binyamina to the south, and between the Zikhron Ya’akov – Binyamina road and the agricultural lands of Hanadiv Valley to the east and the southern Mt. Carmel cliffs to the west, overlooking transport routes and agricultural lands.
The park’s location represents the Mediterranean region with respect to its proximity to the Mediterranean Sea and also represents various topographies, microclimatic conditions and soils, including terra rossa and rendzina soils, cliffs, foothills, a hilly region, wadis and different slope directions. Similarly, the park expresses the close connection between humans and nature that generally characterises Mediterranean landscapes (fire, grazing, plantings etc.).
The land is privately owned by Yad Hanadiv (Rothschild Foundation) and is thus unusual in the Israeli landscape, where most of the public land is owned by the government and managed by state-run organisations. 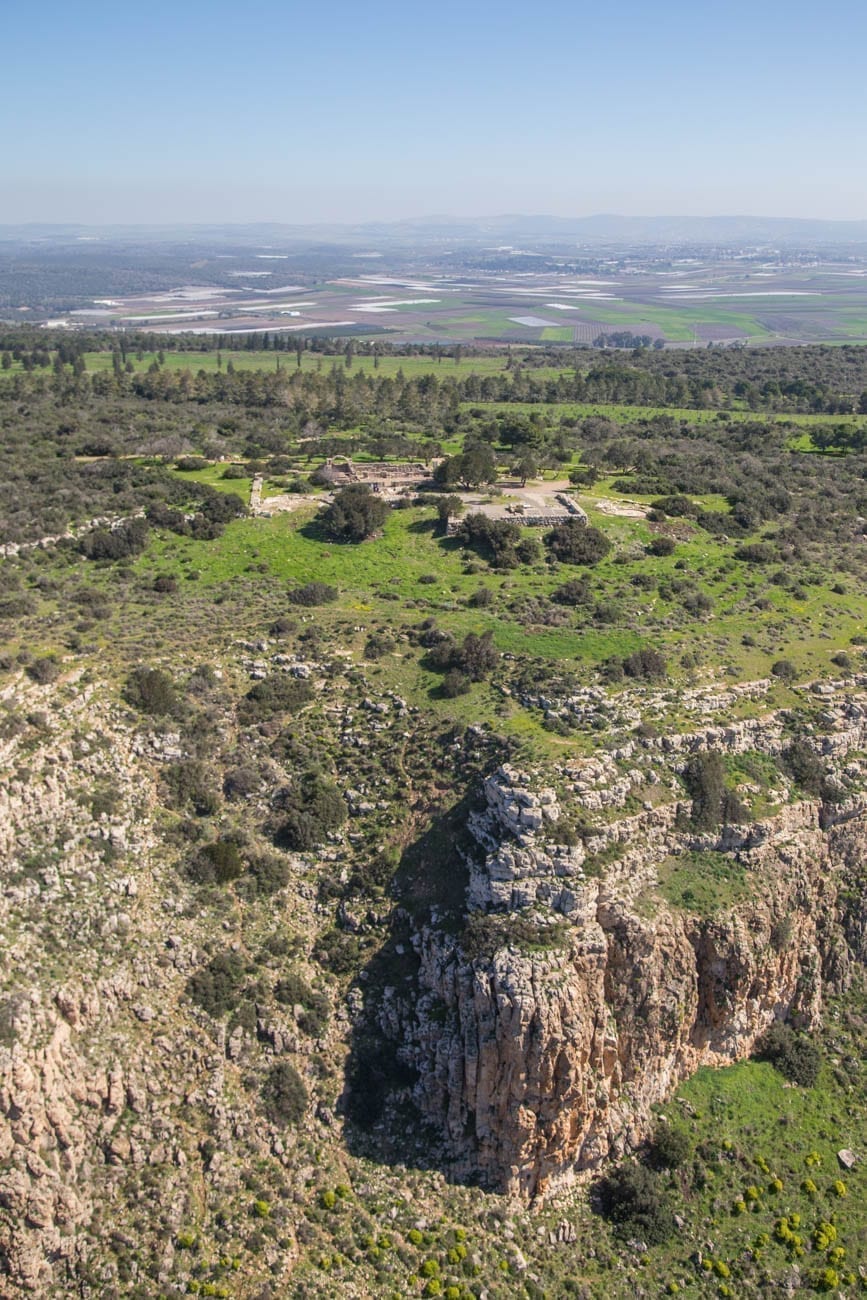 For many years, the landowners debated over the location’s designation. There were plans to establish a botanic garden for world and biblical plants and the national centre for physical education. In the 1970s Keren Kayemet LeIsrael – Jewish National Fund received the mandate to manage the land, and during this period it planted groves of pine, cypress and other species throughout the park. In the mid-1980s the Society for Protection of Nature in Israel teamed up with Yad Hanadiv with the aim of turning the area into a park to be used by the public for different purposes.

The first action, strange as it may seem, was to discover the site’s hidden treasures. Field and landscape surveys and archaeological surveys indicated that there was more to it than met the eye. Also, the understanding of the local ecosystem was very limited, preventing intelligent development (that which prevents unintentional harm to local nature) of the site. In this light, it was decided to act simultaneously through several modes of action. One mode of action was research, putting understanding before action, from the notion that we must understand the natural conditions of the park before we try to change, shape or develop it. Despite our intensive research action we feel that there is still room for continued accumulation of knowledge. In this booklet you’ll find a concise survey of the research actions. Likewise, you’ll be able to enjoy the fruits of the different studies, as summarised in the different booklets available for the public.
The second mode of action was archaeological excavations and exposure of ancient sites of settlement in the park. Thus Horvat Aqav has been excavated, including restoration of its farmhouse
containing a range of agricultural facilities; Horvat Aleq is still being excavated; and Ein Zur (Ein Um el Aleq) and its accompanying water system (tunnel, aqueduct, Roman pool and bathhouse) has been excavated and restored for our enjoyment. Similarly, an ancient cemetery (tumulus field) was identified to the south of the park and cleaned (see the chapter on archaeology).

The third mode of action was to prepare the park for visitors. A network of walking trails leading to the main sites in the park was set up. Most of the trails are circular – they begin and end in the Memorial Garden. The trails have different levels of difficulty and are well marked, and each trail has its own information booklet. 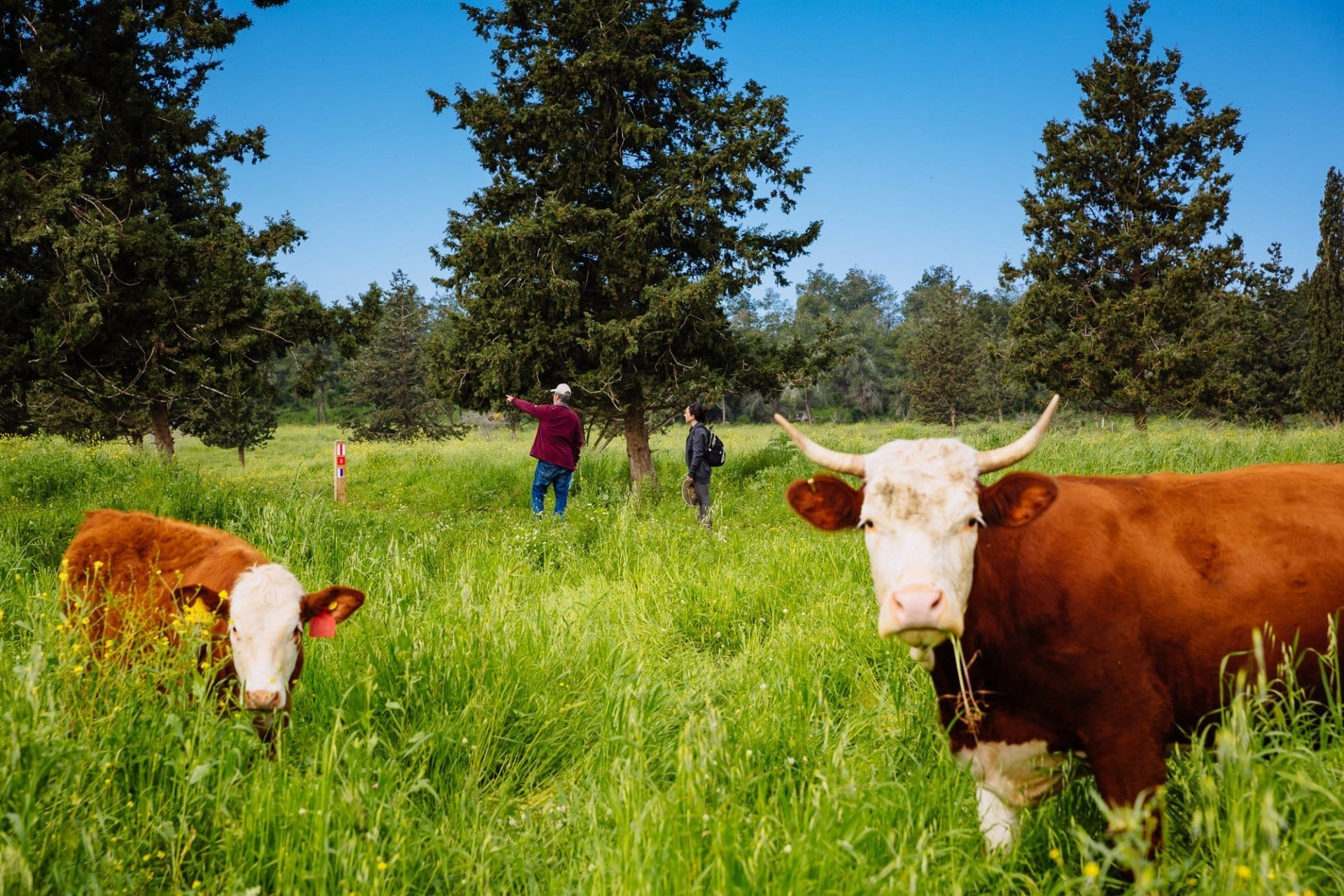 The fourth mode of action is park management. Initially we identified the need for active human intervention on the behaviour of nature in the park. This intervention is derived from the fact that like other Mediterranean open landscapes the park is covered by woody vegetation (trees and shrubs), and the woody vegetation cover increases each year. This vegetation contributes much flammable material through both fallen, dry plant material and broken branches that accumulate on the ground. This situation turns the local vegetation into a concentrated source of flammable material, and the ignition of a massive fire is just a question of time. In May 1980 most of the park was burnt when a fire entered from the chicken coops of Ma’ayan Tzvi to the north and destroyed most of the natural vegetation. Management at Ramat Hanadiv is intended, first and foremost, to prevent ignition of the next fire.
The main management tool for this purpose is animals that eat the vegetation: a herd of cattle is brought to the park each year and spends about 4–5 months here for the purpose of greatly reducing the amount of herbaceous vegetation in the park’s open landscapes. This vegetation dries up in the summer and acts as the ‘wick’ for the fire. The cows do not eat shrubs or trees; therefore a local herd of goats also grazes in the park – it works as a localised treatment unit in patches of woody vegetation that we want to open up. 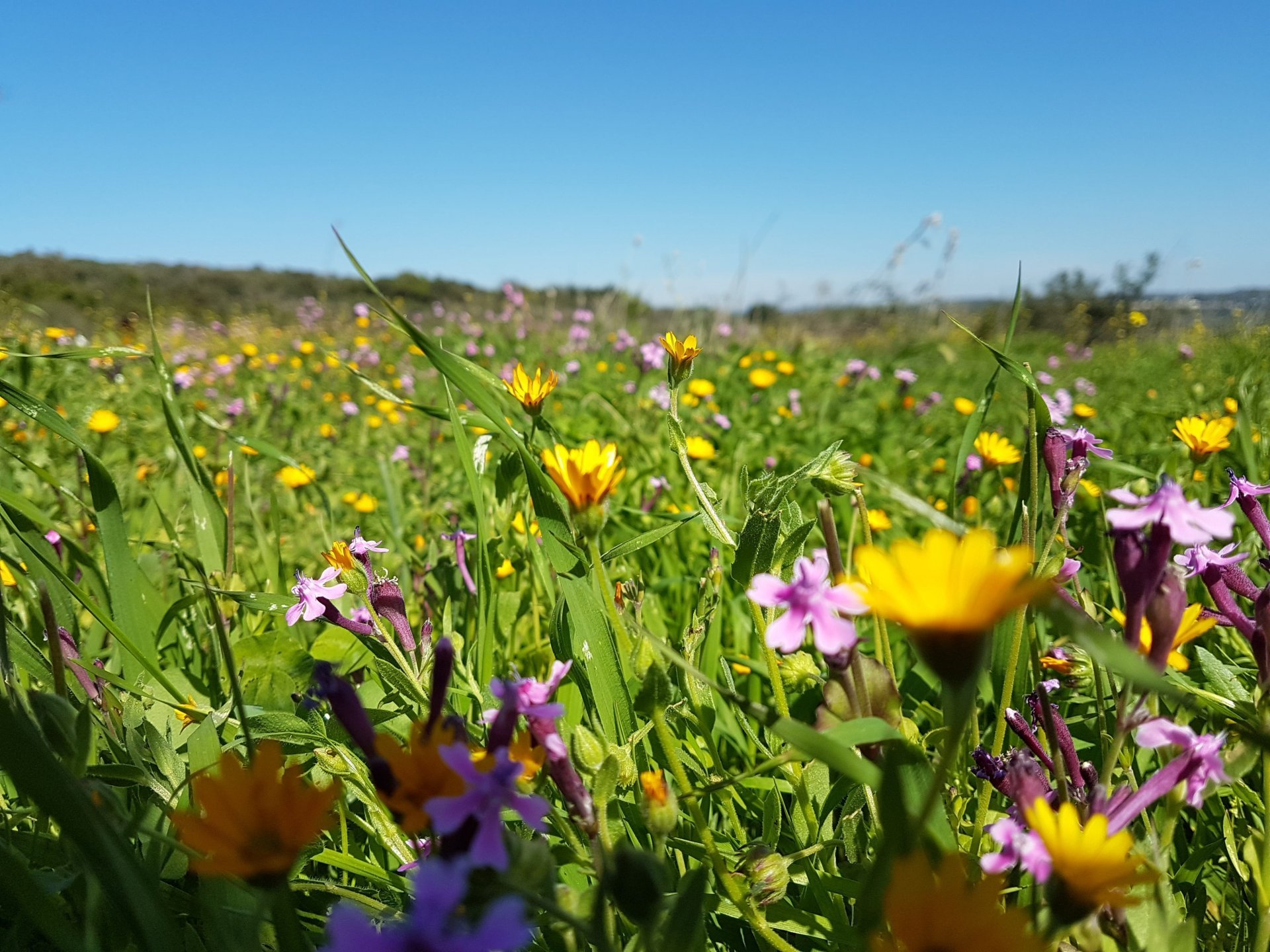 The continuous encroachment of the woody vegetation into the open landscapes is undesirable, not only because it may facilitate wildfire, but also because this process suppresses the herbaceous plants and most of the park’s flowers, which do not develop well in the shade of shrubs.
Furthermore, in the absence of herbaceous vegetation and open patches some of the animals that require this habitat will also disappear. Therefore, another management objective for the park is to regulate the encroachment of the woody vegetation and maintain open landscapes with herbaceous vegetation and flowers. Grazing also helps to achieve this aim. We operate modern devices (saws and other tools of destruction), as necessary, for intensive treatment of certain vegetation units.
Among the management and conservation actions in the park we emphasise the treatment of rare species of plants – 6 ‘red’ species – that receive intensive treatment, and the reintroduction and strengthening of populations of animal species that were harmed throughout history. Thus the roe deer was introduced here about 100 years after the last individuals were hunted on Mt. Carmel. This was the first reintroduction of this species to nature in Israel. Likewise, we are trying to reintroduce the lanner falcon to the park’s cliffs and strengthen the vulture population that almost completely disappeared from Mt. Carmel during recent decades.

Another mode of action in the park is public activity. This activity is divided between formal educational work with teachers and students in the education system (see the chapter on education) and reception of organised or family groups.
The final result of this multidimensional activity is a relatively small site that facilitates a very wide range of activities for diverse communities and various stakeholders. Alongside hikes at varying levels of difficulty, you may also find opportunities to learn about nature and history from the elementary school framework to university courses; from a hike with the goats to a concert in the bosom of nature. The park also serves as a model for the management of woodlands and planted forests in Mediterranean conditions for organisations working in this field.