Many trails traverse the Memorial Gardens. We recommend this route, but you
can choose to walk another route. Nevertheless, we recommend you print out the
full route before you set out on your walk, in order to avoid a frustrating
encounter with stairs at several places along the way. For your convenience,
wheelchairs may be borrowed from the InfoShop. 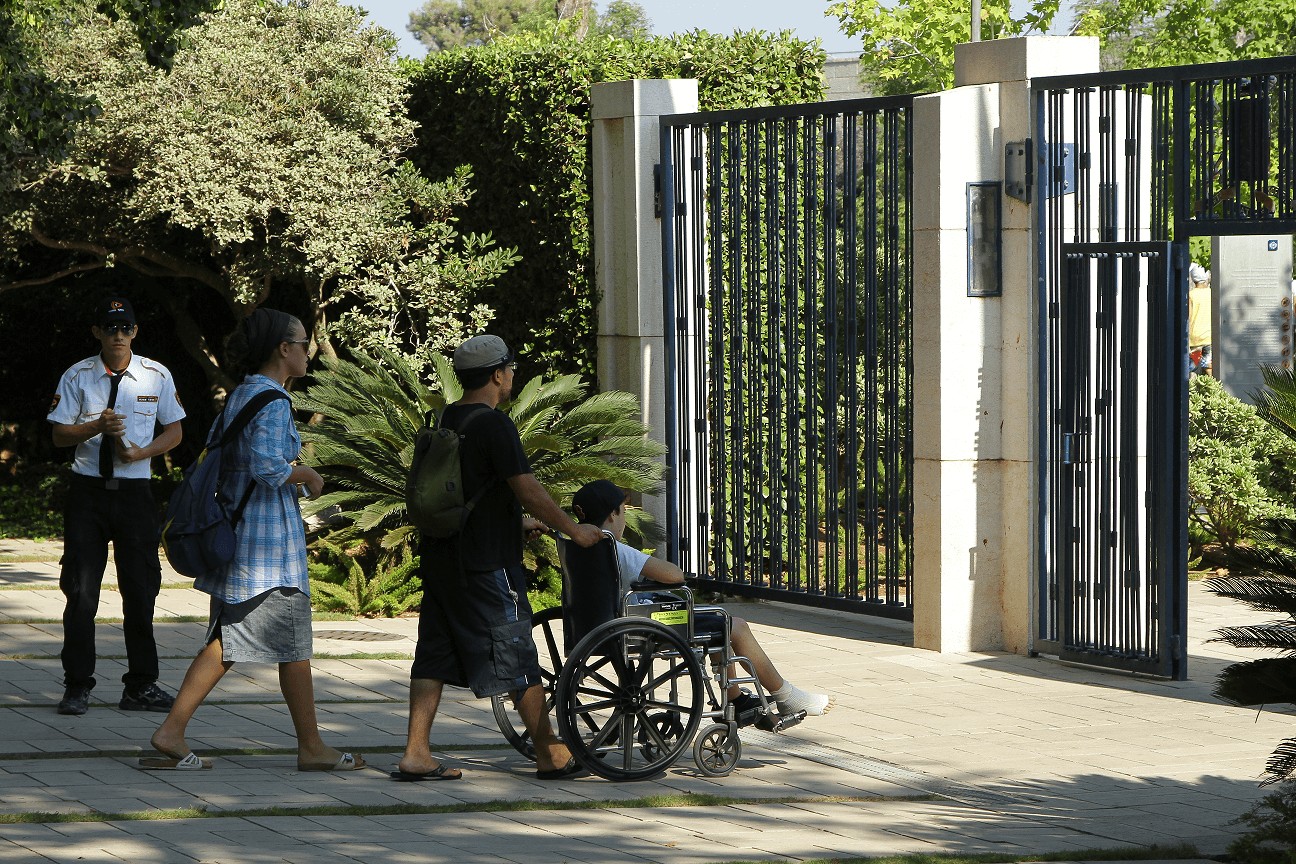 Description of the route:
The tour begins at the entrance gate, overseen by the Rothschild family
Inside the gate, the entrance area is paved and divided into five long strips, representing the five Rothschild brothers. The number five repeats itself as a motif throughout the Gardens. . To the right of the entrance area is a shaded spot with benches, providing a convenient and pleasant meeting place

The path continues straight ahead and leads to the Fragrance Garden, which was designed especially with visually impaired visitors in mind. It is intended to appeal to the senses of smell, touch, and sound, as well as to the sense of sight. The garden contains raised beds of fragrant and sweet-smelling plants, flowers, and herbs. A guide rail above the retaining wall of the raised area is studded with explanatory labels in Braille, in addition to signs in Latin,

Hebrew, and Arabic. A wooden pergola with benches provides shade and a place to sit and enjoy the soothing sounds of the fountain.

Continue along the path to the Palm Garden, which contains a small sample of the more than 2,800 varieties of palms from all over the world. Among the types of palm cultivated here are those with tall, straight trunks and tousled boughs; round, crested sprouts that grow close to the ground; and fountain-like splayed foliage. Most familiar of these is the Washingtonia, long known as a trademark of the Baron’s settlements.Samaria Observation Point

Further along the trail is the Samaria Observation Point, which opens onto a view of the Samarian hills, and the Rose Garden.Rose Garden

This garden contains one large and five small pools with fountains, representing Mayer Amschel Rothschild and his five sons, while the roses themselves, in their variety and profusion of colour, recall the love that the Baron and Baroness had for flowers. New varieties of roses for gardening and landscape are constantly being tested in the nurseries of Ramat Hanadiv.

At the far end of the garden is a semicircular stone pergola rising behind the sculpture of a crouched woman holding a sundial. The woman looks away from the dial, as if divorced from time, hinting that here, time stands still.

The Crypt
The path crosses the Rose Garden and continues on ahead. Turn left at the intersection of the paths towards the Crypt. A second turn to the left is indicated by a sign leading to the courtyard of the Crypt. The paved courtyard is surrounded by a decorative pool and a colonnade of black marble pillars. A large cypress tree, reminiscent of a flame, is the dominant feature of the courtyard, representing a memorial candle. To the right of the tree is a sculpted stone ‘cup of tears’ that drips water into the channel below.

Pass through the heavy metal gate to a low passageway that leads directly to the Crypt itself. The entrance is illuminated by rays of light that pierce the stone exterior. Overhead, six heart-shaped lamps light the passageway. Two strips of black stones in the paved floor represent the inevitable descent to death.

In the burial Crypt is a tomb of black polished basalt in the form of a seven-sided polygon. It is here that the Baron and Baroness were reinterred twenty years after their deaths. Their son, James de Rothschild, fulfilled his father’s wish to be laid to eternal rest ‘in the rock’ of Israel, close to the community of Zikhron Ya’acov.

Cascade Garden
Return to the main path and turn right. The curved path leads to the Cascade Garden, which acts as a window to the western landscape of the Mediterranean Sea below.

of his Uncle Nathan’s daughter; Mazkeret Batya, in memory of his mother,

Betty; Ashdot Ya’acov, in honour of his son, James, who carried out his Will.

The Memorial Gardens were designed on the basis of contrast: between life and death, flowing water and stone paths, sun and shade. At the bottom of the Cascade Garden is a pool that features a sculpted pair of hands on its rim. The hands seem to be attempting to hold the water that streams forth, symbolizing the inability to stop time.

From the upper part of the garden, continue straight in the direction of the entrance gate. Seven broad steps lead back to the entrance area and the gate of the Memorial Gardens. Visitors in wheelchairs may circumvent the steps by turning left and taking a longer but level path back to the gate. 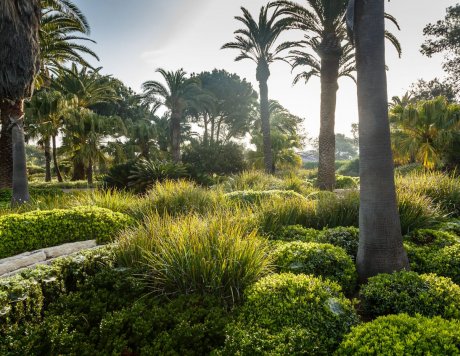 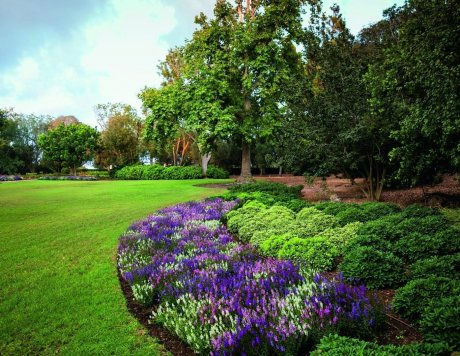 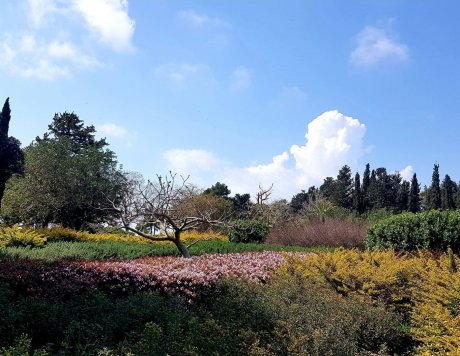 Who lived at this spot 70,000 years ago? What major event took place in the gardens in 1954? And what's been going on at Ramat Hanadiv ever since then?
We invite you to find out by getting into a virtual time