The Mediterranean region in Israel has been subject to a long period of human activity and impact, including grazing and tree felling. 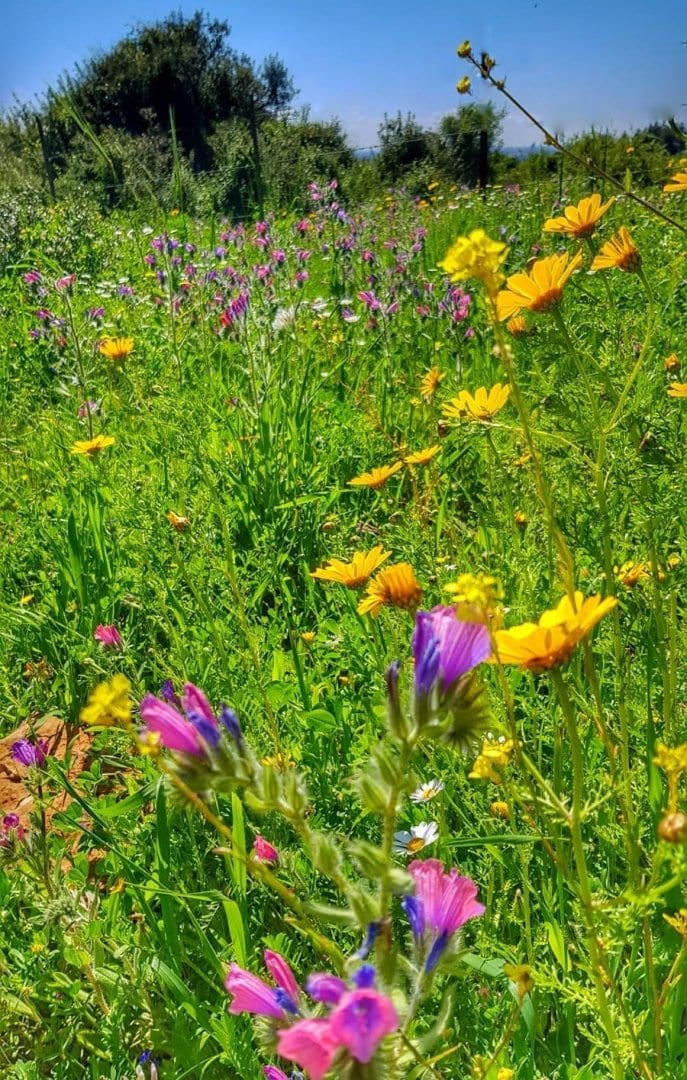 The Mediterranean region in Israel has been subject to a long period of human activity and impact, including grazing and tree felling. During the first decade following its independence (1950-1960) the Israeli Government carried out a policy of conservation that in fact led to the elimination of most grazing and cutting activity. Although this policy helped woody vegetation (garrique and woodland) regenerate, it also led to the closing of herbaceous patches, altered the composition of vegetation and animal communities and increased the frequency and intensity of wildfires. Conforming to this policy, in 1950 Ramat Hanadiv Park built a surrounding fence which prevented grazing on its land for a period of 40 years, until the early 1990s.

The typical vegetation formation at Ramat Hanadiv is Mediterranean garrigue dominated by low or mid-size shrubs such as Phillyrea latifolia, Pistacia lentiscus and Calicotome villosa, and by the dwarf shrub Sarcopoterium spinosum. Between the shrub clumps are exposed rock or shallow soil patches covered by diverse herbaceous vegetation. There are differences in vegetation density and degree of development, which can be explained by the water regime and the rock-soil formations, as well as by land use history.

One of the characteristic traits of the rock-soil foundation at Ramat Hanadiv are the exposures of marly tuff that create the inner valleys, ‘tuff terraces’ on the western escarpment, and wadis that cut into the marly tuff and the central tuff valley. It seems that these areas were once farmed so that none of the natural woodland survived. Today this area is dominated by herbaceous vegetation, along with large isolated trees, planted conifer stands; a portion has undergone scenic restoration and transformed to orchards or agricultural fields.

The eastern Ramat Hanadiv foothills are moderate and their soil is relatively deep. The typical vegetation in this area is open woodland with Carob Trees and shrubs accompanied by abundant herbaceous vegetation and grasses (Gramineae).

The herbaceous vegetation in the woodlands and garrigue appears in patches between the shrubs and rocks and is rich in species (42 species on a 5m2 or 55 ft2 plot; Hadar 1996) with diverse life-forms. The Ramat Hanadiv plant list includes 617 species (of a total of 2388 species in Israel).

Forty-two plant species which grow in the Park are considered ‘rare’ according to Israeli standards (comprising 4.85% of all Israeli rare species); 35 of them are endemic and six are ‘red’ species according to the IUCN. Another species of special interest which grows in the Park is wild wheat, Triticum dicoccoides.

In May 1980, a great wildfire broke out north of Ramat Hanadiv and destroyed considerable parts of the Park (about 25% of the Park area). The vegetation recovered and the woodland closed up rapidly in the early years following the fire, and continues to do so today, albeit at a slower rate. The fire demonstrated the latent dangers in the Mediterranean vegetation landscape in arid areas, as grassy patches dry up as summer approaches and become the wick for the flames fed by the woody vegetation.

In conclusion, Ramat Hanadiv’s vegetation is a reflection of the vegetation in Israel as a whole. On one hand, there is the ‘natural’ vegetation formation that survived through thousands of years of disturbance and human intervention and is now at the stage of recovery and rehabilitation. On the other hand, this recovery leads to woody vegetation taking over open areas and suppressing herbaceous species that have higher species diversity. This picture is made even more complex by the addition of plantings, some exotic species and some local rapidly dispersing species (such as Aleppo pine – Pinus halepensis) which rapidly establish themselves in the ‘natural’ environment. This is further complicated by the use of fire and grazing as management methods (grazing was reintroduced into the Park in the early 1990s as part of the fire-prevention management programme).