Horvat Aqav is the Hebrew name of Hirbet Mantzur al-Aqav, archaeological remains of a compound located at the highest point of Ramat Hanadiv, on the south-western cliff of Mt. Carmel. The compound was used as living quarters during two main periods: the Second Temple Period and the Byzantine Period. 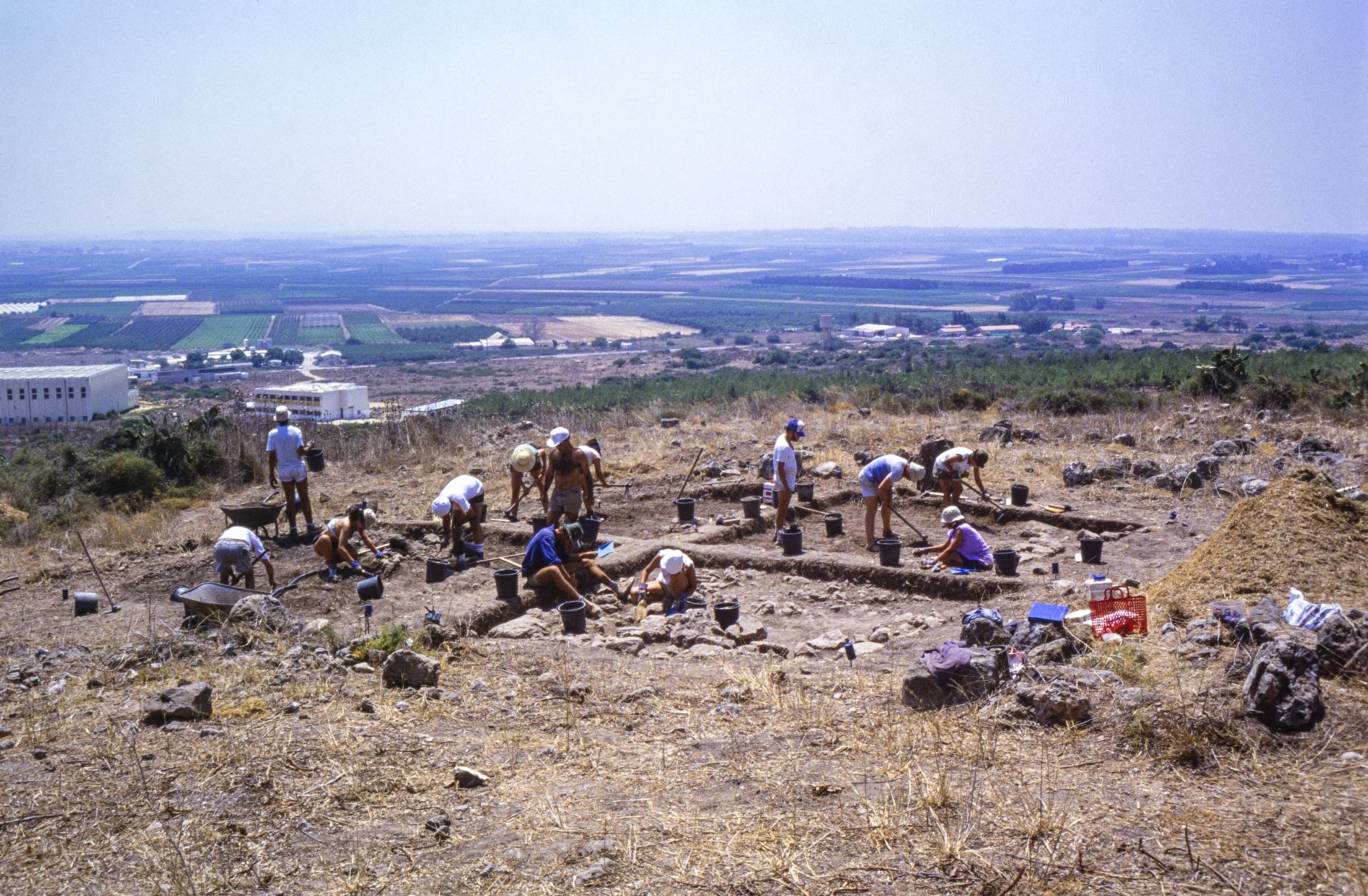 Horvat Aqav contains the remains of a manor, from the Second Temple Period, which was inhabited by Jews until the second half of the 1st century CE. The site was resettled during the Byzantine Period (4th to 7th centuries CE). At that time there was a rural villa that survived, with slight changes, from the mid-5th century until the Arab Conquest (mid-7th century CE). In Arabic this site is known as Hirbet Mantzur al-Aqav (the ruin of the victory-crowned rock).

The first to survey the location were Claude Conder and Herbert Kitchener (1873), members of the Palestine Exploration Fund. More than a hundred years passed until archaeological excavations were conducted at Horvat Aqav during 1984-1987, led by Prof. Yizhar Hirschfeld. The excavation revealed that the stones of the Byzantine structure were brought here in the late 19th century, probably to build the al-Huri farm on Horvat Eleq (details in the description of the Spring Trail). The excavation also provided evidence of settlement during the Middle Ages.

The archaeological site was restored in memory of Amshel Rothschild (1955-1996). In the area around the ruin, olive trees, fig trees and grape vines were planted; these were important crops in ancient times at Ramat Hanadiv and throughout the Holy Land. Herbs such as Syrian oregano, Cretan germander and fringed rue were also planted. 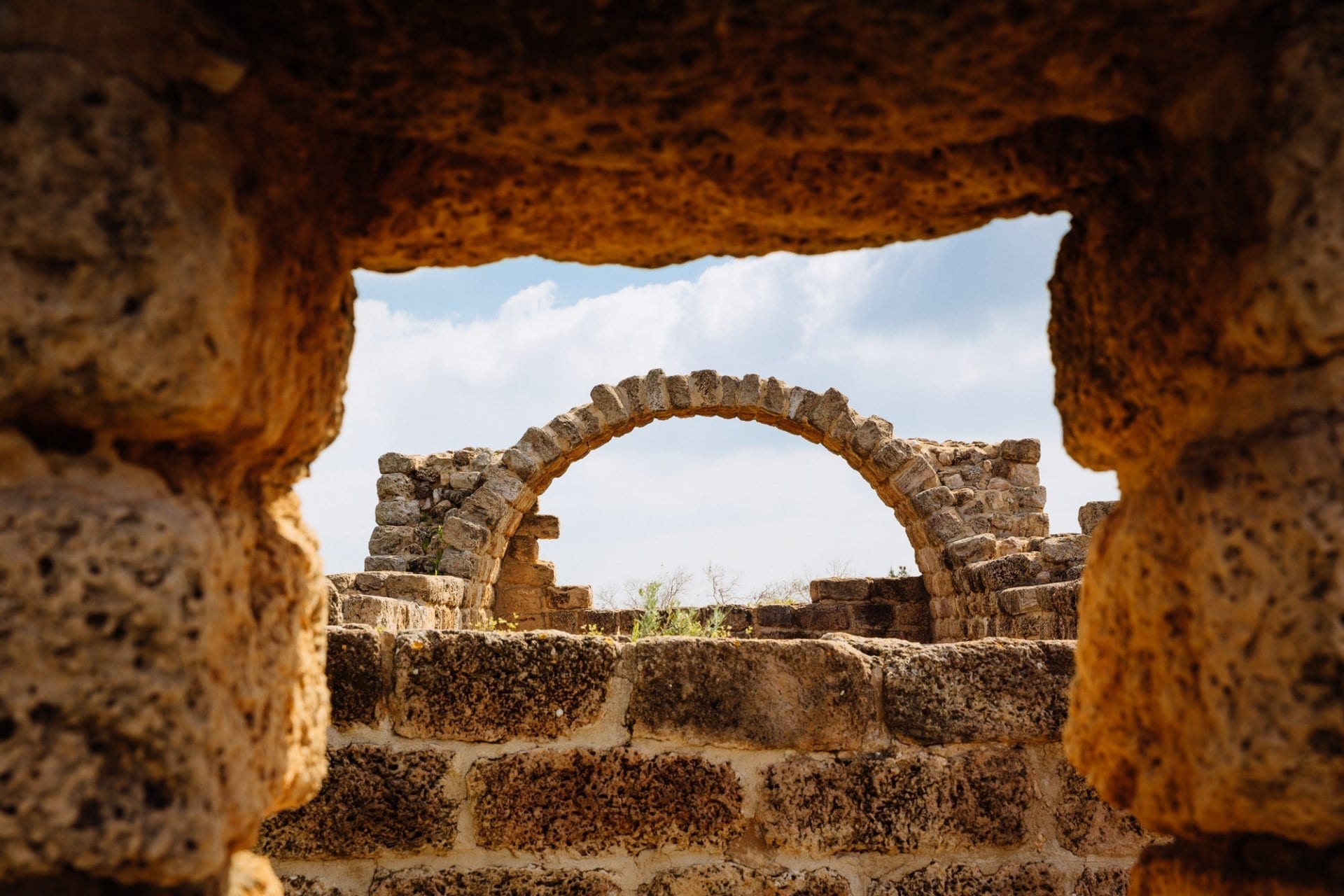 The building covered an area of 2,800 square metres. The manor’s owner was probably a distinguished person. He had a farm manager, employees and servants. Four or five families totalling about 20 people lived at this location.

Horvat Aqav during the Byzantine Period
The site was resettled during the Byzantine Period (4th to 7th centuries CE). At that time there was a rural villa which survived, with slight changes, from the mid-5th century until the Arab Conquest (mid-7th century). The walls from this period, in contrast to the more ancient building, are built mainly from sandstone (kurkar) quarried on the coastal plain, although many stones from

the older building were also used. Adjacent to the entrance gate is a large cistern that was used by the manor’s residents, and later on by the residents of the Byzantine villa. The cistern held rainwater that drained from the roofs and the courtyard. The cistern held 110 cubic metres of water, an amount sufficient to provide drinking water and maintain the farm animals on the property. 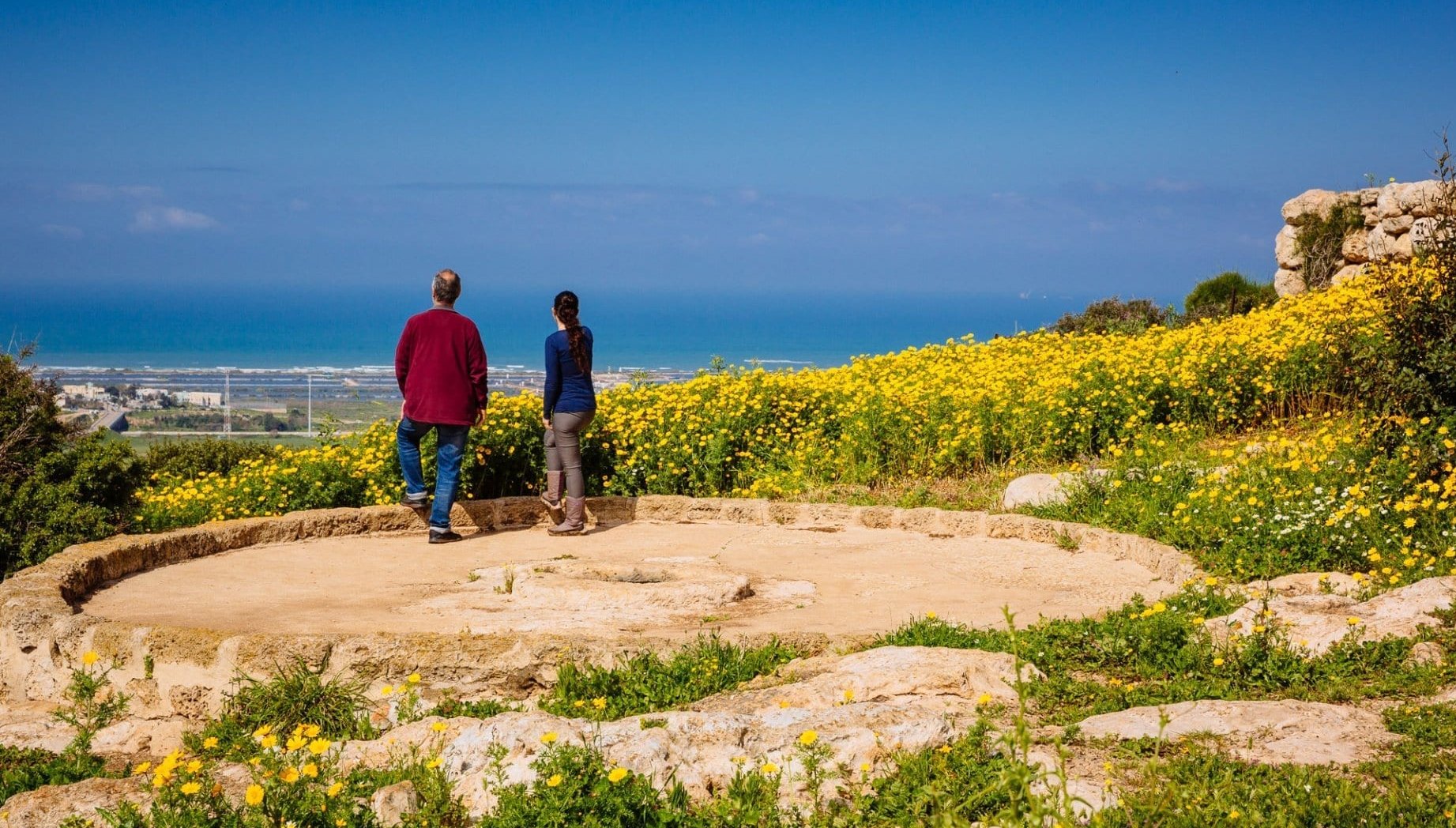 The courtyard and the ritual bath (mikve)
The villa was built in a rustic style and was probably used both as living quarters and for work and storage. The villa’s rooms are open to a paved courtyard where the farm animals were kept.

The northern section was probably used as a wine cellar and storehouse. The large arch at the north-eastern corner of the rural villa indicates that the northern and western sections were two stories high. The upper storeys were used as living quarters, and their facades may have had balconies. The Byzantine villa was abandoned with the Arab Conquest of the Holy Land (640 CE). The demand for wine probably decreased at that time, as Muslims are forbidden to drink it, and the villa’s residents, who made their living producing wine, lost their livelihood. 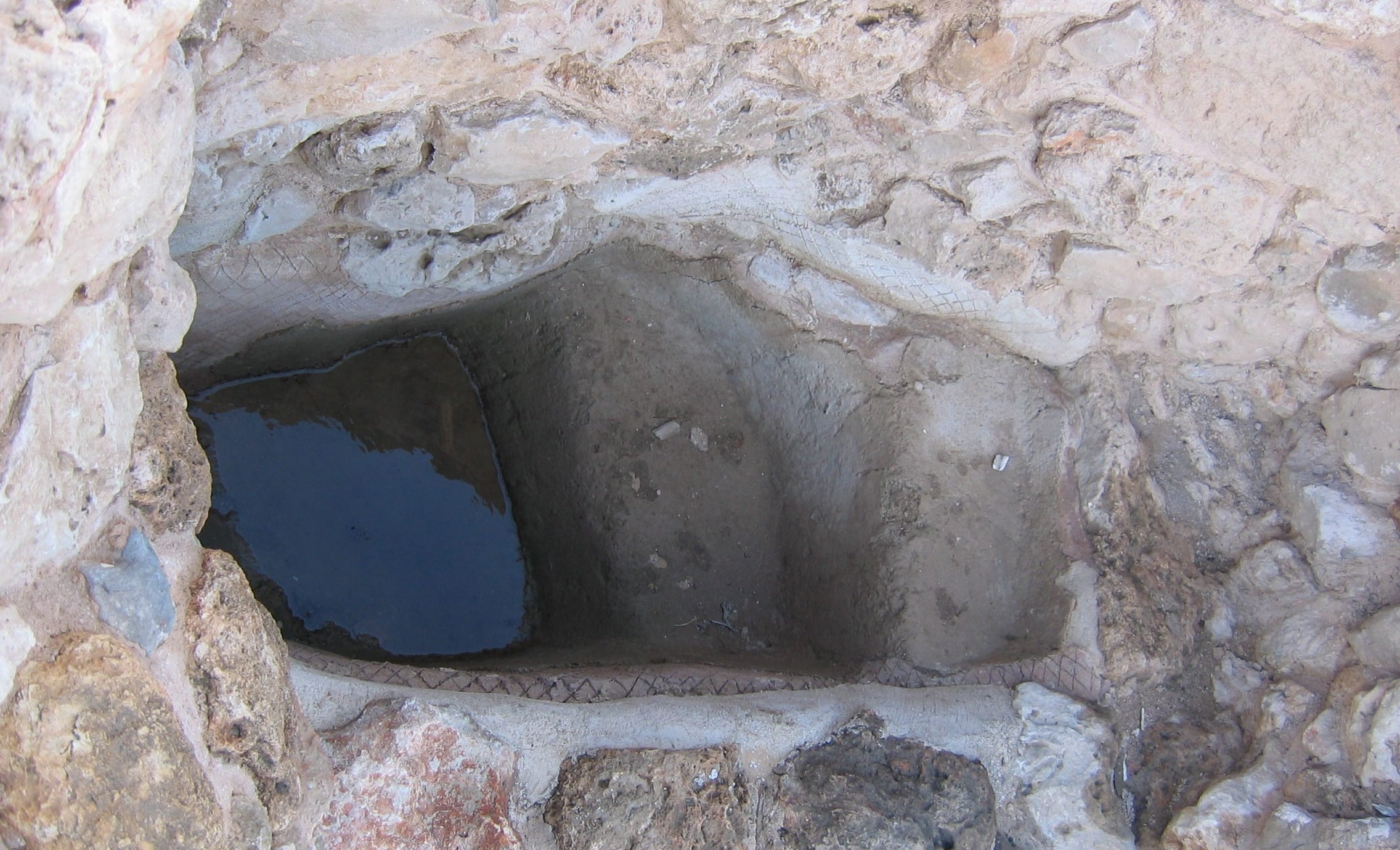 The wine press
On the western side of the compound that overlooks the coastal plain and Mt. Carmel, the farming facilities of the manor from the Second Temple Period were discovered. Adjacent to the western opening is a wine press for treading grapes (a second wine press is located adjacent to the eastern wall). Most parts of the wine press are quarried into the rock except for the side walls, which are partially built and probably also plastered. The treading floor is quarried into the rock and coated with a thick layer of white plaster. The floor slopes in the direction of a pit for collecting the juice. The final squeezing of the grapes in the wine press was performed using a wooden pole and weights, as practiced in the Holy Land at that time. 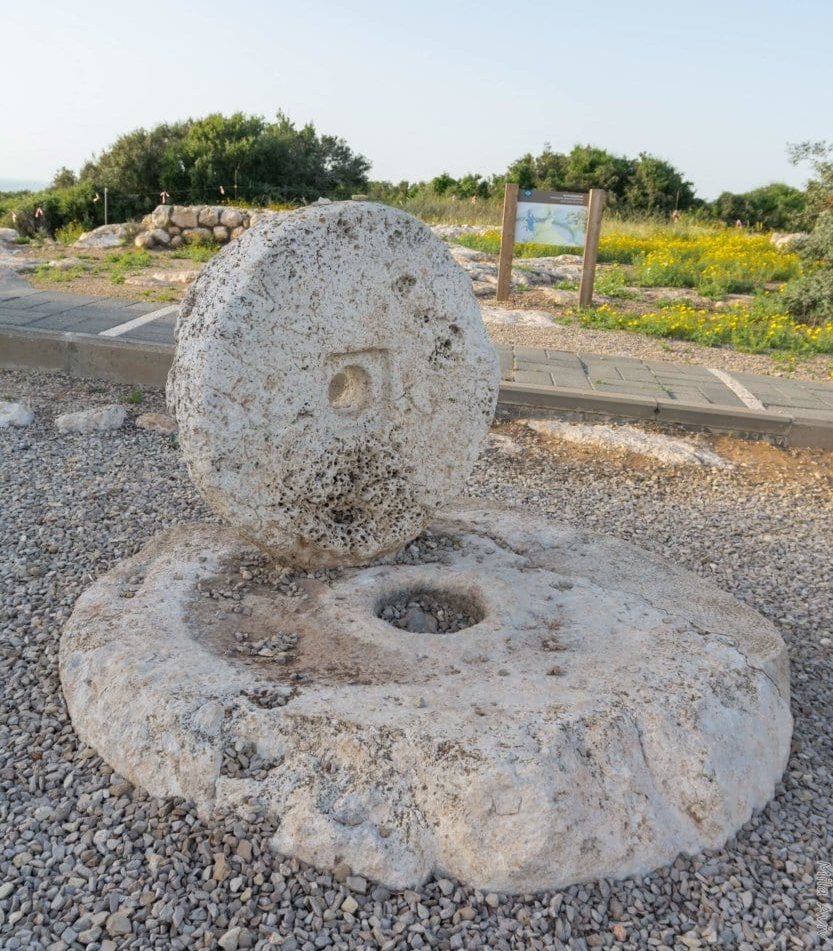 The “midden”
The “midden” – east of the juice-collection pit, there are a number of steps quarried into the rock that lead to the living quarters of the Byzantine Period villa. This was the main entrance to the house. The villa’s residents probably enlarged the ancient juice-collection pit and used it as a garbage dump (“midden” in archaeological jargon). The excavations here revealed more than 30 clay tools, including cooking pots, tableware, oil lamps, coins, broken bricks, and window and granite shards. The most recent tools are from the 7th century CE. The area was covered when the villa was renovated after the earthquake. A new, improved wine press was built south of the villa.

The olive press
North (to the right) of the wine press stands a heavy, round stone. This crushing stone is part of an olive press. Olives were crushed in this facility to produce a pulp from which the oil was then extracted.