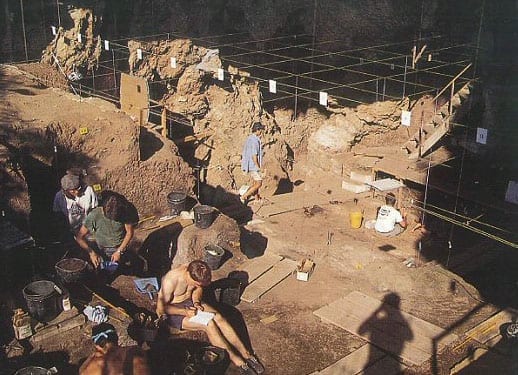 Kebara Cave, located in Ramat Hanadiv’s Nature Park, contains evidence of human existence during the period 70,000–45,000 BCE from the late Mousterian culture. This culture is also known from Tabun Cave on Mt. Carmel and Amud Cave, as well as from a few other unroofed caves, most of which are located in the Negev Highlands and the Golan Heights. Usually a few layers are preserved in these caves; they represent activity that took place on site, tens of thousands of years ago. From the findings we know that the people of this period were hunters and gatherers. Many hearths were also found at these sites.

These human remains are very important for human evolution research and these discoveries have attracted attention from the scientific world ever since. Among other things, the Land of Israel was the place where ancient modern humans met the Neanderthal population, which had evolved in Europe.

Kebara Cave was first discovered by M. Shteklis in 1927, who was working on draining the Kebara swamps. The cave was not used as a permanent residential site but as a storeroom during certain seasons of the year for small groups of people, subsisting on hunting and gathering, whose size did not usually exceed 25-35 people. Migration from site to site was an integral part of their way of life.

Among the Mousterian remains in Kebara Cave were the remains of a baby and an adult skeleton, in two separate graves. On the adult skeleton, from which the skull had been removed while leaving the lower jaw intact, a complete hyoid (tongue) bone was found, morphologically identical to that of modern humans. Its discovery allowed researchers to determine that Neanderthal man was as capable of speaking as we are.