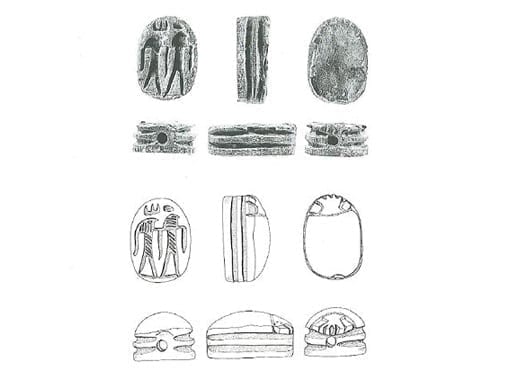 Findings from the Iron Age were found in excavations conducted in Horvat Eleq at Ramat Hanadiv. This period is divided into the First Iron Age, from 1150-1200 BCE to 1000 BCE, and the Second Iron Age, from 1000 BCE to 586 BCE. The beginning of this period is highlighted by the demise of the great powers from the Late Bronze Age – the Egyptian, the Hittite, and the Myceanean – and ends with the rise of Assyria, the destruction of the First Temple and the Babylonian exile. This period is named after the important and common metal, iron. The ability to produce and use iron to make effective tools and weapons contributed greatly to technological development during this period.

Findings from the excavations in Horvat Eleq include clay fragments, namely, illustrated fragments that were imported to this site from the Phoenician coast, as well as a few architectural remains that were discovered underneath later strata. The few findings include a scarab seal from the 13th and 12th  centuries BCE (in the attached photo) on which are engraved the images of two Egyptian gods – Horus and Set – who have the body of a human and the head of an animal. The site at Ramat Hanadiv may have belonged to the Dor district and may have been one of the satellite settlements near this port city. The city and its surrounding settlements were called “Dor and her daughters” in the Bible (Chronicles I, VII:29).