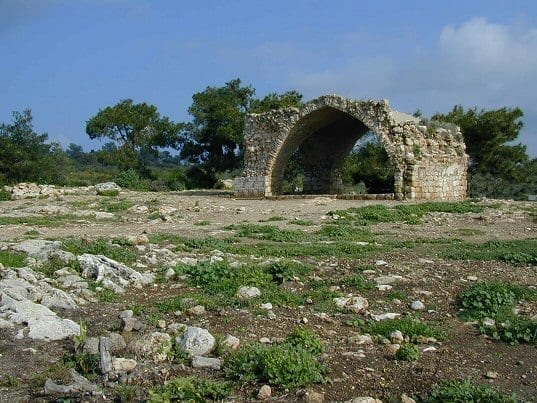 One who hikes the trails of Ramat Hanadiv would find it very difficult to imagine how the region looked about 100 years ago, at the end of the Ottoman Empire. The landscape and physical conditions were completely different in those days. One could see rocky areas with a few cultivated fields, isolated trees, a few small, poor Arab villages on the edges of the ridge, two farmhouses housing a few poor tenant farmers, and above all the presence of the huge swamp at the foothills of the ridge, with its reed thickets and herds of buffalo. The sky abounded in the vultures that nested on the cliff at the western edge in those years.
A few hints of modernization were the poles of the telegraph line running from Haifa to Jaffa, which passed through the area, and a small plot of mulberry trees for breeding silkworms, which were planted on the edges of the swamp by the Huri family, wealthy Arabs from Haifa who purchased the land during the 1880s.

This was a remote stretch of land, cursed by the abundant water, and rife with malaria, which struck the few residents who lived here. From the magnificent sites that existed during the Roman and Byzantine Periods only ruins remained, and the fertile soil was barely cultivated. A marked change in the landscape began only with Jewish settlement during the First Aliyah Period, part of the enterprise of Baron Benjamin (Edmond) de Rothschild. In those days this area of land was called “Umm el Aleq – Shuni”, named after the two farmsteads located here; it included all of present-day Ramat Hanadiv, part of the valley to its south (Hanadiv Valley) and a strip of land at the base of the cliff, to the west. The farmsteads were not wayside inns serving passing convoys, but rather agricultural courtyards established by the landowners to house the farm tenants and manage the crops. “Aleq” in Arabic is “leeches”, and the elders of Zikhron Ya’akov remembered that the colony’s barber brought leeches from the small spring next to the farm (now called Ein Zur) to treat his clients. The name “Shuni” comes from the ancient Hebrew name “Shumi”, or in its Arabic version, “Shuna”, the location of the crops and the granary.

The land was purchased from the Huri family by Baron Benjamin (Edmond) de Rothschild in 1913, as part of his policy to expand Jewish ownership in the region known as Samaria. Following the purchase, a few groups of young adults, from children of the Zihkron Ya’akov colony to those of the Beitar movement, lived successively in Ramat Hanadiv, and in Shuni at its foothills, trying to hold onto the land.
The first were the children of Zihkron Ya’akov farmers, who were chosen by JCA (Jewish Colonisation Association) officials to cultivate part of the purchased land, and to guard the entire area. These same young adults were members of the “Gideonim Association” that was established at that time in Zikhron Ya’akov, aiming to prove the abilities of the colony’s members to work and guard the land. The association was led by Alexander and Aaron Aaronsohn, and its members became the active core of the Nili spy ring.
They were joined by additional workers, members of the Second Aliyah; JCA provided them with agricultural equipment, work animals and seeds, as well as a “donkey in excellent condition for use in the courtyard”. They committed to reimbursing all of the expenses from the “granary”, i.e., from the expected crop yield, and were entirely subordinate to the JCA officials, who managed all of the colonies patronized by Rothschild from 1900. Thus, for example, when two Yemenite workers from the 1912 Aliyah joined the work effort they were received only “for experience, to see if they are capable and strong”.
The group living here, which gradually grew during the years 1914 – 1916, comprised a “microcosm” of the communities of that time: “Gideonim” from the colony, Russian immigrants with a socialist mindset, immigrants from Yemen and the USA, and a few members of “HaShomer” organisation, alongside Arab farm tenants and JCA officials from Western Europe who managed and supervised all of the settlers.

During those years the name “Givat Binyamin” was coined, in honour of the Baron, for the settlement nucleus that developed here. This name expressed, more than anything, the hope of these young people to establish their own settlement at Ramat Hanadiv, but this hope was cut short due to the events of World War I which led to dispersal of the workers and destruction of their attempt at settlement. The end of World War I heralded a new, revolutionary phase in the region’s history and a change in its landscape.
The vision of Baron Benjamin (Edmond) de Rothschild was, in his words from 1924: “to concentrate my work mainly in Samaria, to drain the Kebara swamp, and thus heal the environment and unite the colonies from Zikhron Ya’akov to Hadera; here I want to create a sophisticated agricultural settlement that will be an example to many”.

Following his plan, many groups of workers reached the courtyards of Umm el Aleq and Shuni during the years 1919 – 1925; these workers joined the effort to drain the Shuni swamp and establish the “Exemplary Colony” – present-day Binyamina – and hoped to support themselves on the lands of Ramat Hanadiv.
The first to settle in Umm el Aleq itself were members of “Hashomer Hatza’ir” from Central Europe and Lvov, founders of the Third Aliyah, who immigrated to Eretz Yisrael in the summer of 1920. Their work was to dig channels for draining and drying up the swamp that was created by water from the surrounding springs and from Taninim River (Wadi Timsahi, in Arabic) at the foothills of the ridge.
Indeed, they came here motivated by burning Zionist faith, but the reality that faced them at Umm el Aleq, the hard physical work that they were not used to, the diseases, the heatwaves, and an almost complete lack of elementary equipment for the life of a person coming from Europe, overwhelmed them. Within a few months all of the group’s members had scattered in all directions. A few died of malaria, others left the country or went to live elsewhere. There were also some who committed suicide. It’s not surprising that this place was called “Umlalak!” (a play on the word “umlala” – miserable) in the slang of that period.
A few other groups followed these early pioneers and tried to settle at Ramat Hanadiv, on the land owned by JCA, which with time became PJCA (Palestine Jewish Colonisation Association). Some even managed to establish their own small farm, sponsored by PJCA, but none of the groups became a permanent settlement. In parallel, at Shuni, there were additional groups of workers who worked in agriculture, drained the swamps, and preparing the land for the establishment of the Binyamina colony, according to the vision of Baron Benjamin (Edmond) de Rothschild. Indeed, Binyamina was founded in early 1923, and was considered a truly magnificent creation, in those days, due to the excellent conditions the settlers received.

The human composition of the colony’s founders was diverse and interesting: children of farmers from the established colonies, members of the Jewish Battalions, graduates of Mikve Israel Agricultural School, immigrants from the USA, and wealthy farmers from Zikhron Ya’akov.
The last attempt to settle Ramat Hanadiv itself was in 1937, when a group of former Beitar members settled at Umm el Aleq, and later at Shuni as well. They established a “Wall and Tower” settlement called Tel Zur and hoped to succeed where others had failed: to establish a permanent settlement on the land of Ramat Hanadiv.
An agricultural kibbutz was indeed created at Tel Zur; its members cultivated the land of Ramat Hanadiv and its foothills, and the place also became a very important base for the training and activities of the Etzel underground movement, but in the end PJCA did not approve the establishment of an independent settlement on the ridge, and in 1946 its members founded Nahalat Jabotinsky, an agricultural moshav, on the outskirts of Binyamina. Thus, despite the many attempts, no permanent settlement was ever established at Ramat Hanadiv, which in those days had already been designated for the establishment of a Memorial Garden and crypt for Baron Benjamin (Edmond) de Rothschild and his wife. Although its execution was delayed for a few more years, this was the spirit of the Baron’s own will.