Let the Trees Breathe — Through their Roots

The Visitors Center at Ramat Hanadiv was awarded a Certificate of Excellence for its outstanding implementation of green building standards. One of the major elements contributing to the building’s high rank was its green roof and the landscaping around it. In order to create shade, a dozen plane trees had been planted at the main entrance to the garden and in the patio courtyards of the building. Four more plane trees were planted along the central pedestrian path.  This is the story of those four trees. 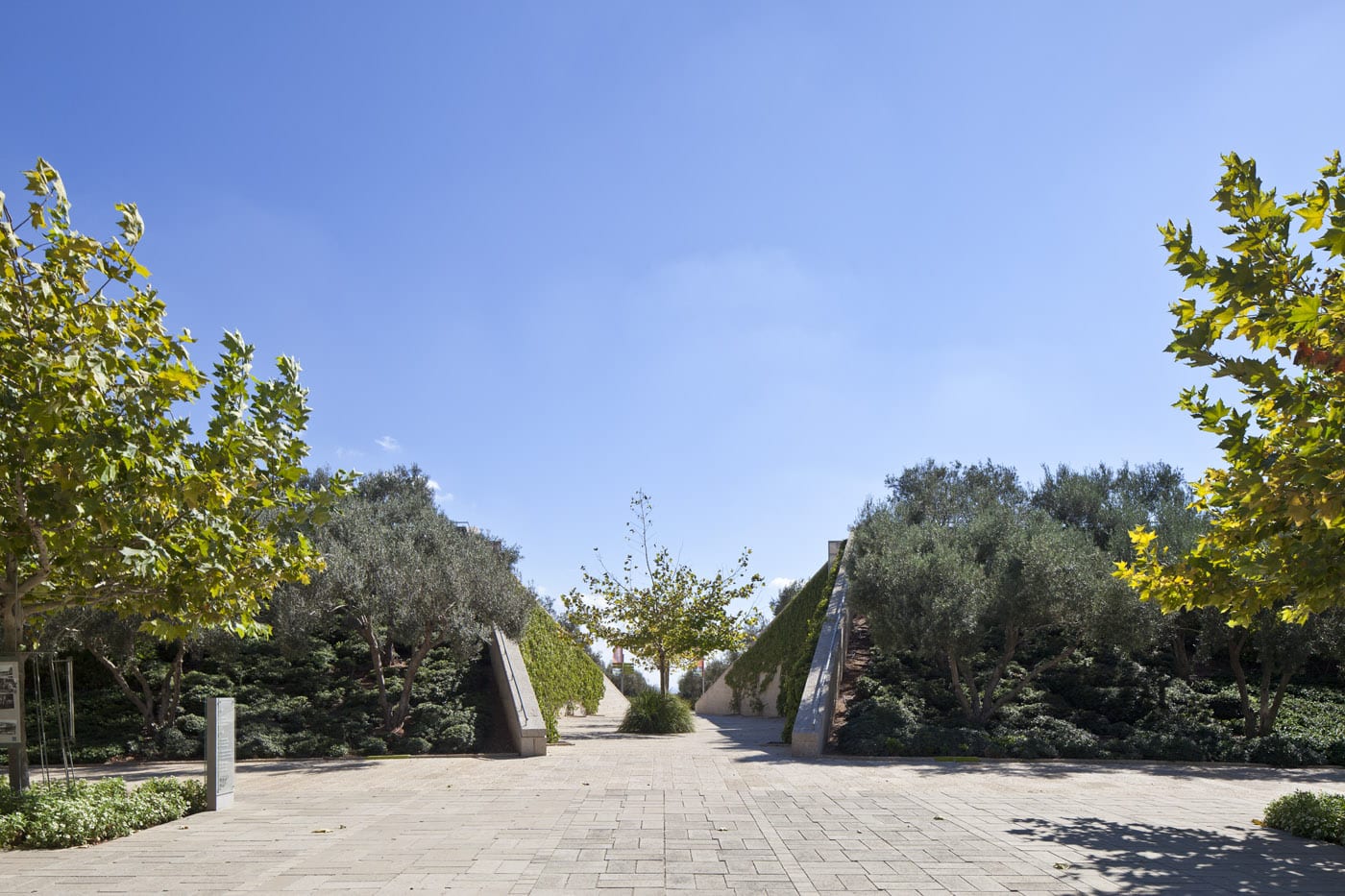 Introduction
The oriental plane tree (Platanus orientalis) is known world-wide as a fast-growing deciduous tree, reaching a height of 25 meters or more during its long life. Our trees were planted in rich soil mixed with compost and regularly given the exact amount of irrigation to guarantee that they would adapt and grow well at the Visitors Center. So it was no surprise that all the plane trees flourished as expected — except for the four that graced the walkway connecting the entrance to the Memorial Gardens and the exit to the trails of the Nature Park.
These trees were surrounded by the tall narrow leaves and flowers of bicoloured dietes (an elegant member of the iris family), which quickly grew into a crowded mass, giving rise to the suspicion that they were unfair competition for the tree roots, gobbling up precious resources that the trees needed. But even when the dietes were removed from the mini-plots where

the trees were planted, the trees were not happy. There was no improvement in their health. Since they showed no signs of disease or pests, the experts cast their eyes below ground to seek the cause — and the cure — for the trees’ sorry state.

What’s the problem?
The root of the matter (so to speak), was precisely there: in the structure of the soil surrounding the roots of the plane trees, which was subject to enormous pressure from above. From the paved path to the car park for trucks and double semi-trailers, the weight of the traffic had compacted the soil beneath it and caused a change, mostly negative, in the soil’s ability to absorb, filter and drain liquids and to allow the tree roots access to fertilizer and oxygen. Thus the growth of the trees was stunted, their vitality diminished, and their survival in doubt. In the meantime, the trees’ developing roots were getting thicker and thicker, taking up more space, until they would eventually manage to raise and break through the paving above and around them.

In urban areas where plane and other trees are planted in pavements, it’s necessary to consider advance planning to ensure the efficient absorption of soil elements, which are required for the trees to succeed in the long term. Unfortunately, trees are often planted with the best of intentions, but without the proper conditions for their development. The result: The plants remain small and sad — if they don’t suffer torture and premature death.

The cure?
The solution to the woes of such trees: Improving the quality of the soil throughout the life of the tree. A Dutch company called Silva Cell has developed a system of sturdy underground cells made of polypropylene mixed with fiberglass (glass fibers that support the structure) which can support a suspended pavement system above plants while providing powerful capabilities for aeration and the drainage and absorption of water and nutrients in the soil below ground, where they are available for the healthy growth of tree roots. The system also permits runoff into the planting holes, thus reducing the flow of rainwater and allowing for better seepage — no small thing, if we recall the extreme rainstorms of the past few winters.

The roots
Did you know? When plant roots in the northern half of the globe get stuck by some obstruction, they grow horizontally in the opposite direction from the earth’s rotation. Thus they end up winding around themselves. This fascinating tendency, however, is not healthy for a tree. In order to prevent this phenomenon, Silva Cell panels with protruding rails are laid around the edges of the planting hole. A root that grows up to the rail gets the hint and starts growing downward instead, towards the soil, without turning itself upside down towards certain death.
Another advantage of the Silva Cell is the fact that there is an air space between the suspended pavement above it and the growing medium beneath. This space allows the roots to thicken without danger that they will damage the pavements, while preventing them from growing upward. This company has thought of everything. 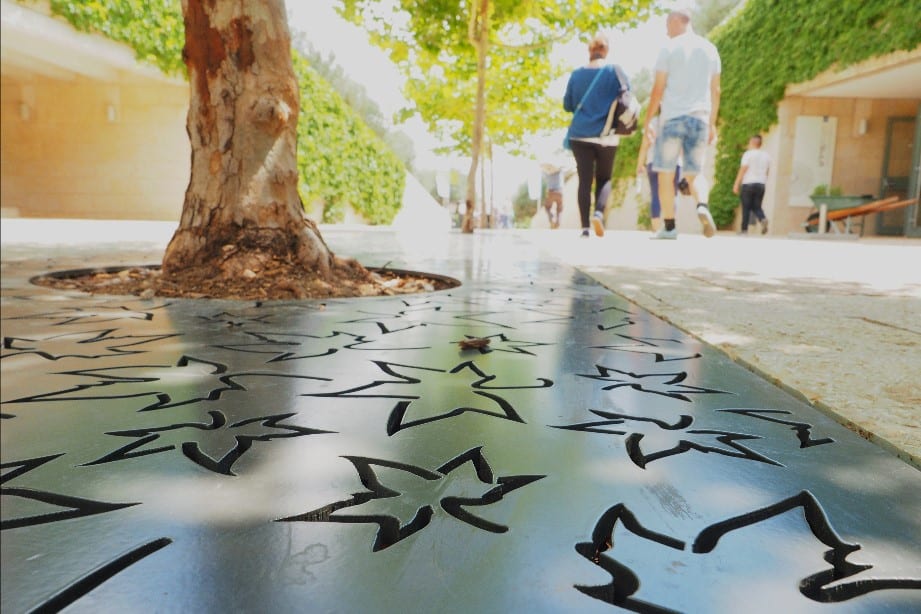 A look from above…
A layer of wood chips covers the planting medium in the planting holes, which are edged with a steel frame; within it are steel panels decoratively etched with a pattern of plane tree leaves. These create a single, continuous surface between the pavement and the growing cells — an excellent model of an accessible space. Needless to say, the engraved leaves match the pretty trees, and children and their young-at-heart companions often like to frolic on these surfaces.

So…what have we got?
Our four plane trees are now installed in planting cells that are 1.3 meters deep and 3 meters wide, filled with local planting soil and 20% compost. Between the cells is an irrigation pipe that continues along the entire length of the planting cells. A circle of irrigation pipe surrounds the trees at the top, and an additional circle at the bottom of the cell provides aeration and drains off excess water.

Is it worth it?
First of all, let’s consider the value of large trees that grant us shade in the heat of summer — they are priceless! Beyond that are many universally acknowledged benefits to having trees in the environment. And if the price of such a worthy investment is still worrisome, take into account that the Dutch invention got help at the start from American manufacturing, which increased the initial price of the Silva Cell. Very soon, its manufacturing will be moved to Holland and then, through the hands-on work of the industrious Dutch people, the price is expected to go down. Furthermore, the new generation of cells will allow for much greater flexibility in the height of the cells, which can then be adapted more precisely to the specific requirements of each site.

To summarize: Giant trees shading hot urban streets, car parks and blazing islands of asphalt and cement are sorely lacking in Israel, but they are within reach — with the right planning for many years ahead. And for all our existing trees, in obvious distress due to a dearth of oxygen, water and root space, the trouble entailed in creating a high-quality environment can’t be too highly recommended — for the sake of the trees, for ourselves, and for future generations.