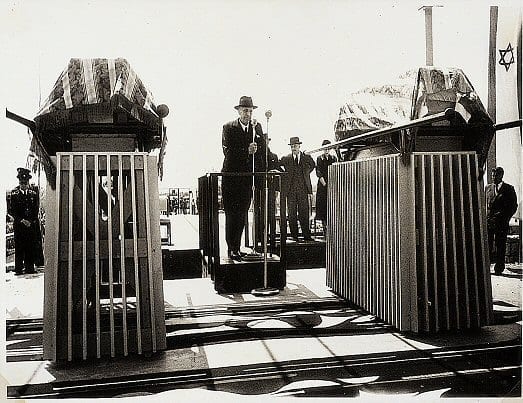 Opening of Ramat Hanadiv and Inauguration of the Gardens

On 6 April 1954, some twenty years after they died, the remains of Baron and Baroness de Rothschild were brought to Israel aboard an Israeli naval vessel. Their coffins were reinterred in a state ceremony at Ramat Hanadiv.

The choice of Ramat Hanadiv as their final resting place was based on an event during one of the Rothschilds’ visits. As the Baron was touring the stony cliffs at the southern edge of the Carmel hills, he expressed his desire to be buried ‘in the rock’, namely in the stony soil of the Carmel.

In 1936, about two years after his death, his son James de Rothschild and James’ wife Dorothy initiated the establishment of the Memorial Gardens. They designated the hill known at the time as Umm el’Alek, a beautiful spot located among the Baron’s colonies, as the site of the gardens.

Among the luminaries present at the ceremony were Prime Minister Moshe Sharett and president  of the State of Israel, Yitzhak Ben-Zvi. David Ben-Gurion, the country’s first prime minister, wrote in his eulogy of the Baron: ‘I doubt that in the entire history of the Jewish people in the Diaspora, a period of 2000 years, one could ever find a man comparable in stature to the incredible figure that was the Baron Edmond de Rothschild — the builder of the Jewish Yishuv in our renewed homeland’.

The burial day of the Baron and Baroness also marked the opening of Ramat Hanadiv’s gates. About four years later, in 1958, Israel passed the ‘Ramat Hanadiv Law’, determining that Ramat Hanadiv would hold these lands and manage them as  public gardens and a park dedicated to commemorating Baron Edmond de Rothschild, popularly known as ‘the Generous Benefactor’, and ‘Father of the Yishuv’.

Since then Ramat Hanadiv has served as a living memorial to the Baron’s legacy and endeavours.