Electrical sustainability at Ramat Hanadiv is based on saving and on solar energy. Both of these principles are important for reducing our carbon footprint, since the electricity we consume is produced by a coal power station that has a negative effect on air pollution. 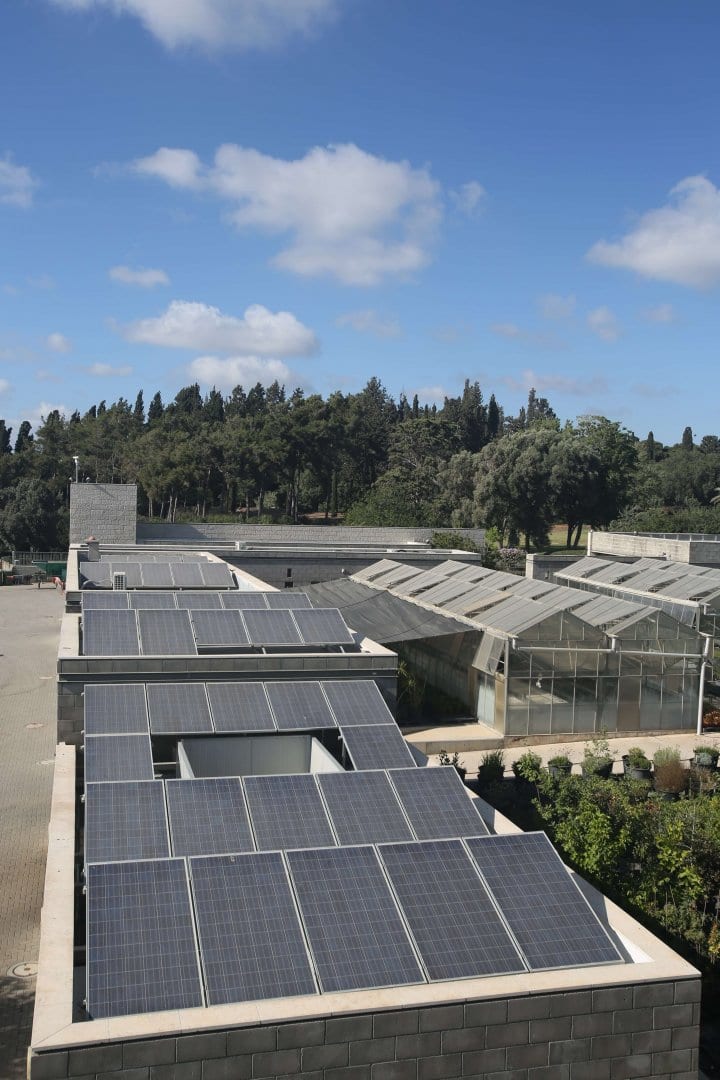 To save energy we chose to install an innovative geothermal system in the Visitors Pavilion for cooling the air inside the building. This system is based on the fact that the temperature of the soil at a depth of 2 m or more remains constant and stands at 21.7 degrees Celsius; thus the warm water flowing to the soil’s depths cools down by about five degrees while the cold water flowing to the soil’s depths warms up. This sophisticated system includes two separate, closed water systems that meet in a unit called the chiller (heat exchange).

The first water system, System A, brings the heat from the internal spaces of the Visitors Pavilion to the chiller, via water, and returns to the building with cold water.The second water system, System B, brings the heat from the chiller, via water, to the soil’s depths and returns to the chiller with cool water. System B includes 30 cylindrical shafts with a diameter of 15 cm that were drilled to a depth of 40 m in the soil beneath the footprint garden. In each shaft we installed a water pipe that reaches its base, twists like a loop and ‘climbs’ back up to the top. Water carrying heat from the building flows from the chiller into these pipes in the shafts. As it flows to the bottom of the shaft and back up, it transfers the heat to the soil and reaches the soil surface after cooling down by five degrees Celsius. All the water pipes leaving the shafts converge at the ‘switchboard’, where they unite into a single water pipe that returns to the chiller located in the machine room in the Visitors Pavilion. Inside the geothermal chiller, which can produce 20 tons of cooling, gas cools the water by condensation. Here water System A comes into action. The cold gas cools the water flowing in the pipe that transports it along the length of the Visitors Pavilion and all its areas. The Visitors Pavilion is divided into six parts (the restaurant, the auditorium, the InfoShop, the classrooms, and in the eastern wing, the lobby and the kiosk). In each part of the Visitors Pavilion an Air Treatment Unit (ATU) is installed. In the ATUs the cool water cools the air that flows through radiators and aerates the air spaces in the building. Subsequently, the water warms up, flows back to the chiller, and so on. On hot days and when there is activity in several parts of the Visitors Pavilion, the geothermic system is backed up by regular air conditioning that can produce 60 tons of cooling. Ramat Hanadiv uses the geothermic system only for cooling, whereas in cold countries is it also used for heating.

In the rose garden and the cascade garden there are waterfalls driven by pumps. To prevent wastage of electricity we arranged the activity of the pumps using a timer so that they work only during the hours that the garden is open to visitors.